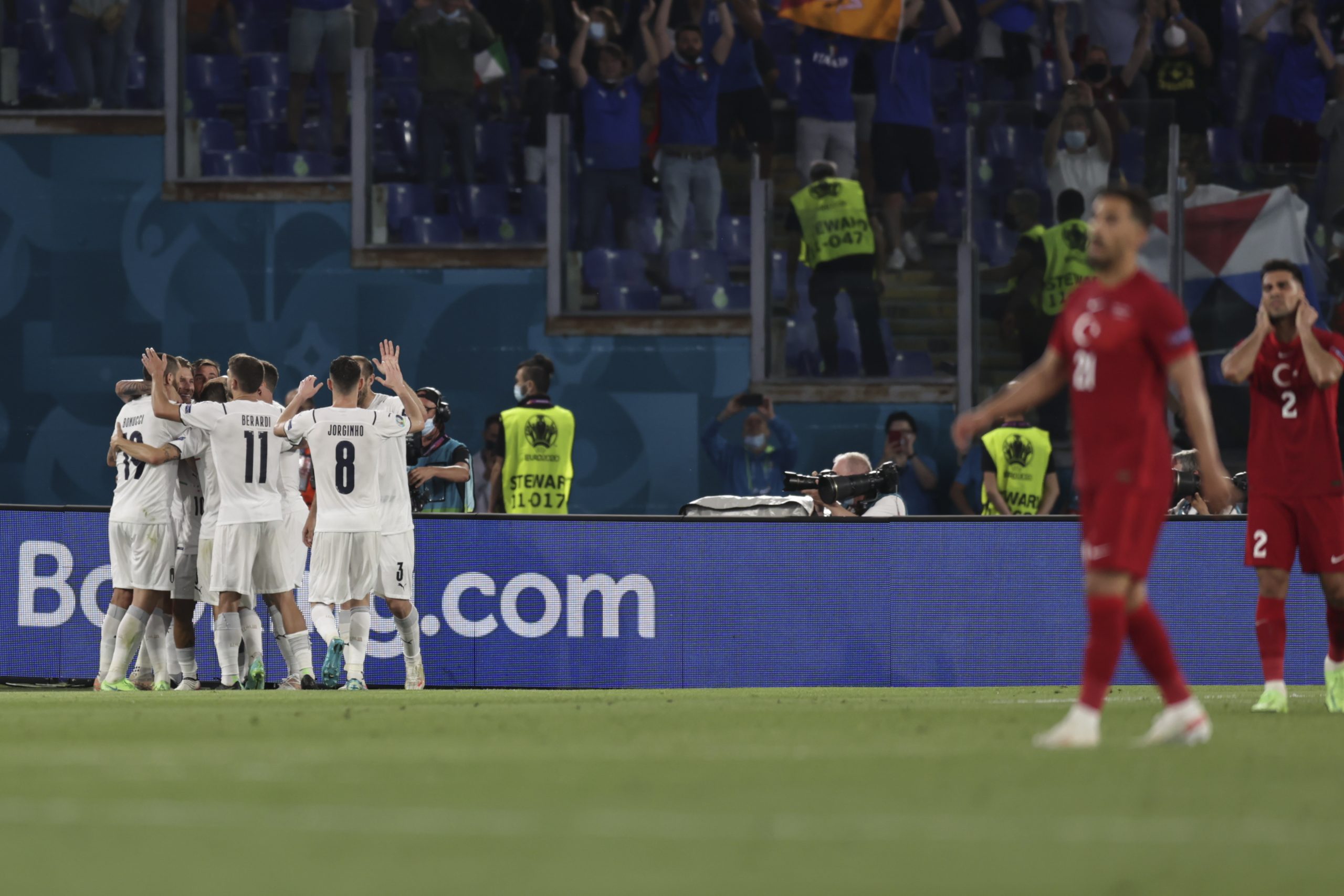 Euro 2020 began with a remote-controlled car delivering the match ball to the centre circle before kick-off. Once the game began, Turkey failed to get out of first gear as Italy cruised to the biggest-ever margin of victory in an opening match of a Euro finals.

It took them until the 51st minute to produce a single shot in this match against Italy, while at the other end Ugurcan Çakir tried his best to keep out Italy with some smart saves. The Trabzonspor goalkeeper prevented a league-high 11.9 goals from shots faced on target in the Turkish Super Lig 2020-21 but was unable to prevent the inevitable Italy win in Rome, tonight. A 3-0 defeat saw them concede as many goals in this match as they did in their 10 qualifiers for the finals.

After a goalless first half, Turkey’s chances of progressing to the knockout stages of the tournament stood at 56.2%. Following a second half collapse defeat, that chance now stands at 40.5%.

For Italy, it was a 28th successive match unbeaten and a ninth consecutive clean sheet. As stated in our pre-match post, they don’t allow their opposition to attempt many shots and when they do, they’re of low quality – something we saw yet again tonight.

Italy outshot Turkey 24-3, but excluding the own goal, the expected goals average of Italy’s shots was just 0.08 – room for improvement as Euro 2020 goes on for Roberto Mancini’s team.

Unbelievably, in what was their 39th game in the European Championships, this was the first time Italy had scored more than two goals in a game within the tournament. Lorenzo Insigne scored the third goal to end this run – one of the 20 players we tipped to shine at Euro 2020.

They won possession back on nine occasions in the final third of the pitch in this match, and those led to four shots and a goal. Only one team have managed to exceed those nine within a game across the 2012 and 2016 European Championship tournaments – Germany’s 10 versus Albania in the last edition, five years ago.

Last 16 qualification is all but nailed on following this rout. Our prediction model gives them a 99.5% chance of progressing to the next stage, and an 82.5% chance of winning Group A. An impeccable start.

The 2020 European Championships finally begin today, with Italy hosting Turkey 364 days later than planned. Better late than never. Turkey travel to Rome with confidence. They’re unbeaten in 2021 so far, with four wins and two draws in six games, including impressive victories over the Netherlands and Norway to start the year. But they are ranked as outsiders according to the Stats Perform prediction model, with the lowest percentage chance of progressing to the knockout stages of all four teams in Group A.

Much of that is down to youth and inexperience. Turkey have the youngest squad average age at the tournament (24 years, 353 days) while only three teams have players with fewer caps on average (21).

Our match prediction model doesn’t give Turkey much chance of victory tonight in Italy at just a 13.7%. Much of this is down to the form of the Italians coming into Euro 2020.

Roberto Mancini’s side are unbeaten in 27 matches since losing to Portugal in a UEFA Nations League match back in September 2018 – 22 of those games have been won, including the last eight in a row.

The goals haven’t dried up since, either, scoring 25 goals in their most recent eight matches. However, most notable about this run of form is that they have kept a clean sheet in every single match. They’ve done this while restricting their opponents to both a low quality and a low total of shots, which will be key to success tonight against Turkey.

Our tournament predictor makes Italy the seventh most likely to win Euro 2020 before a ball is kicked, at a 7.3% chance. Win against a Turkish team tipped by many to do well this summer, and a clear message will be sent to Italy’s rivals for the title.