How Milwaukee Turned up the Heat on Atlanta | The Analyst 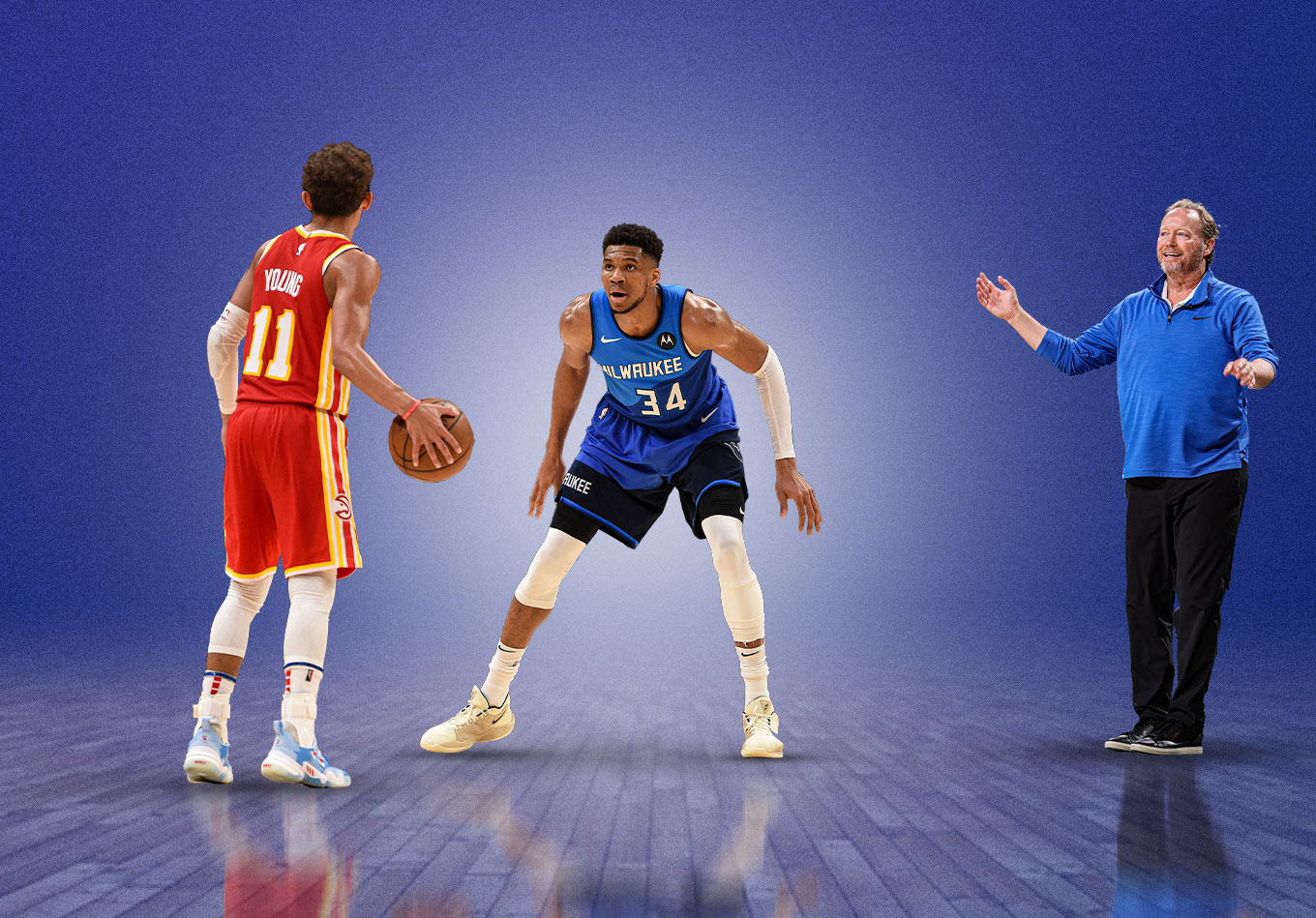 How Milwaukee Turned up the Heat on Atlanta

Trae Young had a monster first game, and then the Milwaukee Bucks adjusted. Can Young solve the defensive puzzle before it’s too late?

In the Atlanta Hawks’ Game 1 upset over the Milwaukee Bucks, they scored 116 points and generated an offensive rating of 114.5.

Trae Young shimmied, tear-dropped and dimed his way to 48 points and 11 assists. John Collins supplemented 23 points and 15 rebounds. Clint Capela chipped in 12 points and 19 rebounds. The victory was a well-rounded performance spearheaded by Young’s brilliance as a scorer and facilitator.

Since then, the Hawks have dropped two consecutive games, relinquished home-court advantage and posted offensive ratings of 91.0 (Game 2, 91 points) and 109.7 (Game 3, 102 points). The Bucks have adjusted defensively, employing an assortment of coverages against Young, but the underlying theme has been to relegate him from creator to scorer.

With 15 points on 6-of-16 shooting and three assists to nine turnovers, Game 2 saw him struggle in both facets. But he was cooking again in Game 3, lighting up Milwaukee for 35 points, including six triples, on 68.3% true shooting. The problem, though, even before a foot injury seemingly limited him, shifting him off the ball for much of the final frame, was 35 points were accompanied by just four assists.

Before Friday, his lowest assist output across 13 playoff games was seven. After Sunday, he’s tallied just seven assists the last two games; he’s also registered 20 potential assists over this span after averaging 18.8 per game in the playoffs leading up to Game 2.

Increased aggression from Milwaukee’s helpers, particularly stunting from the wings or corners, is taking advantage of his undersized stature and clouding his vision for passing outlets or space for his patented floater. Switching bigger wings onto him is discouraging drives altogether and baiting him into a litany of long balls. Both gambits are mitigating the ripple effects of his offensive virtuosity.

A trio of Game 2 turnovers illuminates the Bucks’ approach: crowd his drives and play higher up in drop coverage to complicate the thought process.

Look at all the bodies flocking toward Young inside the arc. Look at the way Khris Middleton and PJ Tucker stunt off their assignments to perturb him on his path inside. It’s a heck of a contrast from two days prior.

In Game 1, the decision-making was simple for the All-Star guard. He’d emerge around a screen and see Brook Lopez or Bobby Portis anchored well inside the paint. With helpers glued to credible spot-up shooters, he salivated at all the hardwood granted for his floater, a shot he excels at better than anyone else in the NBA. If Lopez or Portis stepped up to deter the floater, a lob or drop-off feed was available.

The Hawks hurled the first punch and Milwaukee, most of the time, responded as they anticipated. The result was an efficient, multifaceted offensive showcase for Young and Atlanta, thanks to a whole lotta real estate and stress-free possessions.

A Game 2 rout did not spur contentment from the Bucks, though. Sunday saw them continue to tinker with their defensive coverage against Young, as any sound philosophy is formulated for an offensive superstar like him. At times, they trapped him to steer offense elsewhere. However, they largely opted to switch 1-4 — and 1-5 when Portis or Giannis Antetokounmpo played center — and tossed a bunch of different defenders his way, all of which held a size advantage over him.

Lopez only played 25 minutes in Game 3, which left 23 minutes for switch-all units, though the principle of invasive help during drop coverage continued. Young is a tremendous player, but he’s a sub-50% 2-point scorer for his career (49.5% in the playoffs).

Effective switch-heavy schemes can often be the best way to contain him in ball-screens because he has to find significant room inside the arc to cleanly shoot floaters and midrange pull-ups, finish at the rim or spray passes to teammates. Instead, the preferred choice may skew toward creating space for 3s, as he did Sunday, when he tied a season-high with 14 attempts, including four from 30 feet or deeper.

The byproduct of these tweaks is quelling Young as a driver and requiring his supporting cast to engineer their own scoring chances as opposed to puncturing preconceived advantages. According to NBA Stats, he logged 23 drives in Game 1, 15 in Game 2 and nine in Game. He’s averaging 15.7 drives per game this round, a stark difference in comparison to the 22.2 against the New York Knicks and Philadelphia 76ers.

Similarly, his 3-point rate is trending upward, from .382 to .500 to .608 over the last three games. Young is a good shooter, yet not so good that he should be approximating Joe Harris’ 3-point rate in an ideal setting. These developments are reflected in Atlanta’s struggling offense and Young’s atypical assist totals.

Milwaukee will likely nod its head and tip its cap to such shot-making from him if it means his holistic impact and the Hawks’ offensive exploits are quieted; long-range 3s without paint touches are tenable outcomes for the defense. Its goal is to bait him into overindulging on them or discourage him from zipping downhill, such as against Giannis, and suppress his own playmaking sorcery.

Young’s declining assist numbers are thrusting his teammates into overextended creation roles, especially once he was limited in Sunday’s fourth quarter, due to an unfortunate foot ailment. He functioned off the ball with heightened regularity, took just four shots, three of which were 3s, and scored three points.

When the table-setter is confined, everyone else struggles to eat. Atlanta rosters secondary handlers, but they’re more of the “pick-and-choose” ilk rather than the “get us a bucket independent of Young’s game” ilk. They need the proper circumstances. With pressure from the wings and zealous switching that limits advantage creation, Milwaukee is closing off those circumstances.

Engendering buckets against this Bucks defense so frequently without reliable aid from Young is asking a lot of Lou Williams, Kevin Huerter (who has been terrific) and a compromised Bogdan Bogdanovic. Danilo Gallinari is capable as a mismatch mercenary, but his defensive struggles cap his minutes load and he’s a complementary player, not a foremost scorer.

As Young has devolved from initiator to bucket-getter and others are struggling to discover space, play finishers like Collins and Capela are experiencing a downturn. After teaming for 35 points in Game 1, they’ve scored a combined 34 in the successive two games.

Banking on the fickle nature of Young’s 3-point bombing to commandeer three more wins seems ill-advised, particularly now that he’s dealing with a bone bruise in his right foot. The potential pathways toward a trio of victories appear twofold then.

Either the quartet of secondary ball-handlers rise to the occasion — a daunting task for them — and their newfound success drives the offense via scoring and playmaking for the bigs. Or, and more likely in conjunction with the first suggestion to kickstart those guys than separate altogether, is dialing up the tempo.

Game 1 was played at a pace of 102.0. Games 2 and 3 saw a slip to 96.75. Young is an early offense savant. Perhaps, the natural momentum of an emphasis to attack quickly masks some of the pain and hurdles he experiences in his foot that restricts his downhill burst in the half-court.

The following play is pre-injury, albeit post-adjustments from the Bucks. By initiating the offense before the defense entirely organizes itself, Young encounters space downhill and lofts in a floater.

The ingredients to a better offensive output that evens the series are all here for Atlanta. Young must seek out paint touches. Nine drives may suffice for his individual scoring, but even if the jumper is flowing, the threat of it to set up drives has to be a priority. Fourteen 3s, even with six makes, is not the ideal process.

Williams, Bogdanovic, Huerter and Gallinari should be calculated in who they target on switches to optimize their creation skill-sets. Returning to a pace more reminiscent of Game 1 could bestow everyone a bit more room to breathe and open gaps in the defense that have chiefly been eliminated as of late.

Young’s injury — he’s labeled as questionable for Game 4 — muddies all of this. He is the Hawks’ conductor. They need him to be Trae Young, Villain of the East, Purveyor of Shimmies, Dime-Dropping Entertainer, to re-establish the success of Game 1, not just the supernova shooter raining fire from deep on every switch.

Both are delightfully valuable, but the latter feels like a house of cards waiting to tip over upon one cold spell. The former, at least as it pertains to driving and passing, is a more sustainable foundation for everyone involved. Emulating that portion of the process is how Game 4 could bring these teams back to square one, traveling to Milwaukee, each a pair of wins away from the NBA Finals.