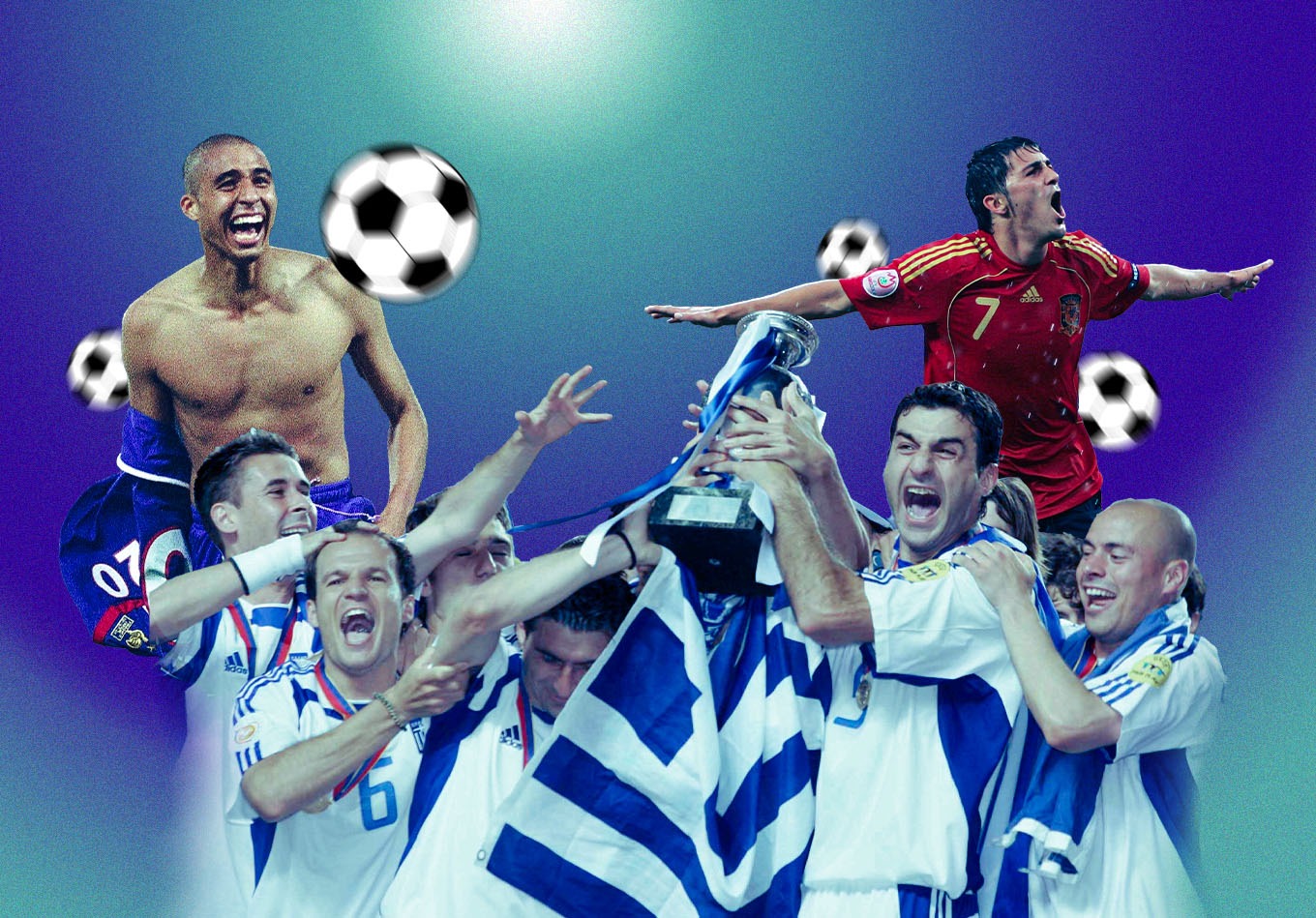 Welcome to the noughties. With goals, cards, late-winners and drama aplenty, this decade produced one of the most exciting stretches of European Championship tournaments in history.

With the turn of the millennia came the turning on of the goal taps, with each of the three tournaments in the 2000s ranking in the top four for goals-per-game.

Not only did Euro 2000 see the highest goals per game of any Euros in the modern era (2.74), but both the semi-finals and final went into extra-time. This level of late-round drama hasn’t happened since in a Euro or World Cup tournament.

The excitement also extended to the referees, who dished out record-high numbers of penalties and cards during the decade.

Again, the drama of Euro 2000 is unmatched. The tournament saw the most penalties awarded in Euros history (13), and also the highest number of red cards brandished (10) as governing bodies started to crack down on dangerous play and various forms of cheating.

Only Euro ’96 saw more cards per game than the Euros in this decade.

Often labelled the most exciting Euros of all-time, we have one team in particular to thank for the thrills and spills of Euro 2000, and that’s Yugoslavia.

Since the Euros began, three of the four highest-scoring fixtures in Euro history have involved Yugoslavia, and the 13 goals they conceded at Euro 2000 is the most any team have conceded in a single edition of the tournament.

Not content with entertaining the neutrals purely through goals, Yugoslavia also received three red cards during Euro 2000, the most by any team in a single Euros.

Yugoslavia’s campaign derailed in spectacular fashion in the quarter finals, where they were beaten 6-1 by the Netherlands in a game where the Dutch become the first and only side to score six goals in a European Championship match.

Despite leading in all three of their group stage matches, England crashed out in the group stage in heart-breaking fashion, a 89th-minute penalty from Romania’s Ionel Ganea sending them home. No side has dropped more points from winning positions in a single Euros edition than England that year (6).

In the semi-finals, Italy pulled off one of the competitions’ greatest Houdini acts, beating the Netherlands on penalties after attempting just two shots on target in the 120 minutes and recording the lowest passing accuracy in any Euros game in history (54%). They progressed despite going down to 10-men in the 34th minute and conceding two penalties. The Dutch infamously missed both penalties, the only time a side has missed two spot-kicks in a single game both Euro and World Cup history.

A total of 31 shots saw the Dutch accumulate 3.1 expected goals – only two teams have registered three or more expected goals in a European Championship game without finding the back of the net: the Dutch that day and Italy in 2012 against England (3.27 xG, 0 goals).

Francesco Toldo saved three penalties in that match, one in normal time and two in the penalty shootout. His heroics would continue into the final against France where, up until the last minute of the game, Toldo had saved 27 of the previous 28 shots he’d faced in the tournament.

Then Sylvain Wiltord powered a shot underneath him to level the scores, sending the game into extra-time. Moments later David Trezeguet completed the turnaround with his famous golden-goal strike. Until that moment, Italy hadn’t trailed for a single minute during the tournament.

France’s victory in Euro 2000 saw them become only the second team to secure back-to-back Euro and World Cup triumphs after West Germany in the early 1970s.

While Euro 2000 generally went as planned, with the World Champions and favourites France winning the tournament, Euro 2004 well and truly tore up the script. European heavyweights, Spain, Germany, and Italy were eliminated in the group stages while defending champions France were knocked out in the quarters.

But the biggest shock of them all was Greece who pulled off one of the biggest upsets in footballing history to lift the trophy. Having progressed through Group A at the expense of Spain and Russia, they knocked out France in the quarter finals before beating Czech Republic in the semis.

A rematch and victory against Portugal in the final capped a crazy tournament for the 150/1 outsiders.

Portugal were the first hosts to reach a European Championship final since France in 1984 – and (until France in 2016) the only home nation ever to lose at that climactic stage.

Greece set a number of records on their way to lifting the trophy. They won Euro 2004 while scoring the fewest goals-per-game of any European Championship winner in the modern era (1.17). They also won the tournament with an average possession figure of 40% – that’s the lowest in history for a champion.

All of Greece’s wins in the knockout stage came in an identical manner: a 1–0 win, with the goal being a header off a cross from the right wing.

In total, 43% of Greece’s goals came via headers, the most of any Euro Champion.

Greece also became the first (and last) team to progress in a tie decided the silver goal method. In their semi-final against Czech Republic, Greek defender Traianos Dellas rose highest from a corner kick to score in the last two seconds of the first period of extra time. It was effectively a golden goal.

The tournament also saw the arrival of two players who would go on to become global superstars. Cristiano Ronaldo made his tournament debut for Portugal as a 19-year-old, scoring as a second-half substitute against Greece in Portugal’s opening game.

Ronaldo has since become a mainstay of the national team. Since 2004, Portugal’s captain has only missed two of their 40 games at major tournaments (World Cup and Euros) – both times they were third group games: vs. Mexico at World Cup 2006 and vs. Switzerland at Euro 2008. When he appears for Portugal this summer, Ronaldo will break the record for most appearances at major tournaments:

For England, Euro 2004 gave a young Wayne Rooney his first taste of international tournament action. Aged 18 years and 237 days, Rooney became the youngest goalscorer in Euro history when he struck against Switzerland. He held that record for just four days though, until Switzerland’s Johan Vonlanthen (18 years and 141 days) supplanted him.

Euro 2004 also saw the fastest goal in Euros history with Dmitri Kirichenko’s goal for already-eliminated Russia after 65 seconds of their group game against Greece, the fastest in any European Championship competition.

Sentruk’s last-gasp goal was just one example of late drama in Turkey’s campaign. In the group stages, they launched two comebacks to progress, overturning a 1-0 deficit against Switzerland to win 2-1, and then came back from 2-0 down against Czech Republic to win 3-2, scoring twice in the 87th and 89th minute.

In their quarter-final against Croatia, Ivan Klasnic’s 119th-minute goal looked to have booked Croatia’s spot in the semi-final. But deep into stoppage time at the end of extra-time, that Semih Sentruk goal sent the game to penalties. Turkey subsequently prevailed.

Despite being eliminated by Germany, Turkey’s semi-final finish in Euro 2008 marked their most successful European Championship campaign to date.

While Euro 2004 saw the youngest goalscorer record fall, Euro 2008 is home to the oldest goalscorer in Euros history, with Ivica Vastic netting for Austria against Poland at the age of 38 years and 257 days.

Euro 2008 marked the beginning of Spain’s four-year international dominance. La Roja remain the only team in history to win back-to-back European Championships (2008 & 2012) and with a World Cup in 2010 sandwiched in between, it really was a golden period for Spain’s golden generation. Indeed, Spain became the first team since Germany in 1996 to win the tournament undefeated.

The Golden Boot winner at Euro 2008 was Spain’s David Villa. His hat-trick against Russia in the group stage saw him become the eighth and latest player to score a hat-trick in the European Championships. With four goals to his name in the tournament, 75% of his goals that won him the Golden Boot came in that opening group game against Russia.

Sidelined in the final against Germany through injury, Villa gave way to Fernando Torres. It was Torres’ 33rd-minute goal that proved crucial on the night, latching on to a through ball from Xavi to dink over an on-rushing Jens Lehmann. The pair share a special place in history: Torres is the only player to score in two different finals of the European Championship (2008 vs. Germany and 2012 vs. Italy) whilst his compatriot Xavi is the only player to have delivered assists in two Euro finals (also 2008 and 2012).

Such was Spain’s superiority over their opponents that day, that they limited the Germans to just 0.21 expected goals in total, the lowest figure for a finalist since Opta started recording this data in 1980.

Despite topping their group with three wins out of three, the Netherland’s 2-0 win over Romania on 17 June, 2008 remains their last victory in the tournament. They were knocked out by Russia in the quarter-finals of Euro 2008, lost all three matches in Euro 2012 and failed to qualify for Euro 2016. 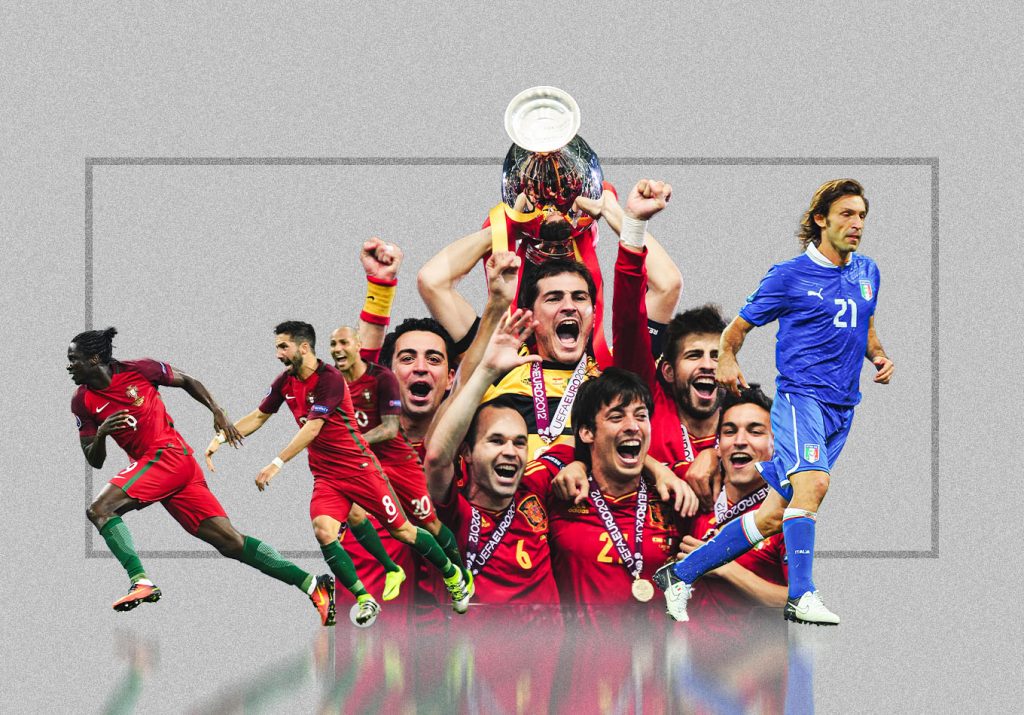 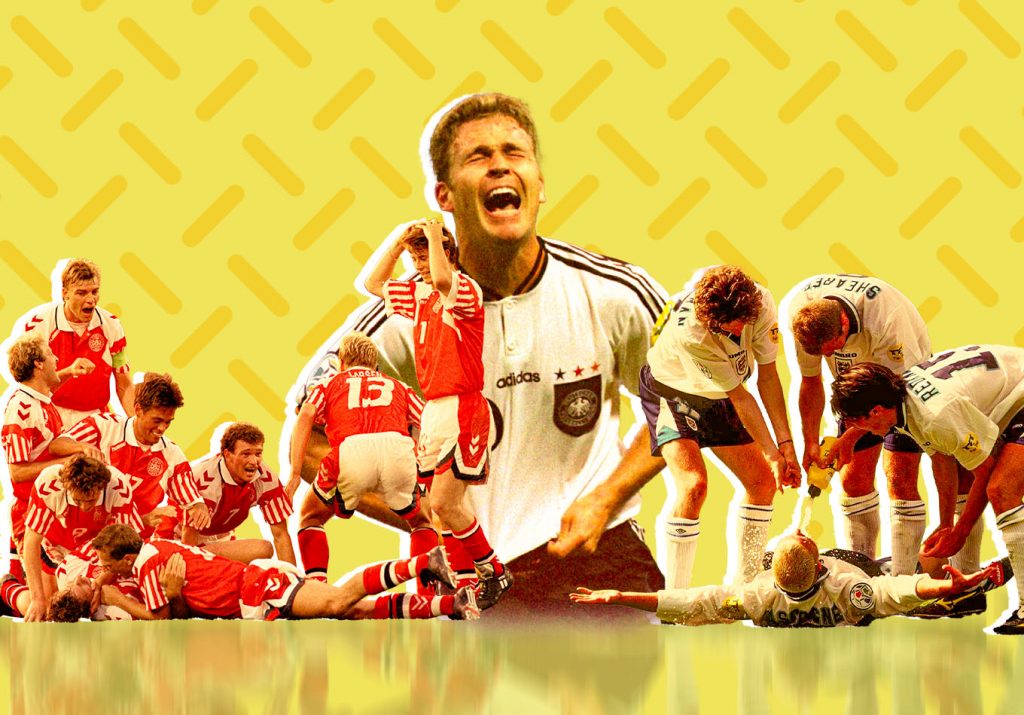 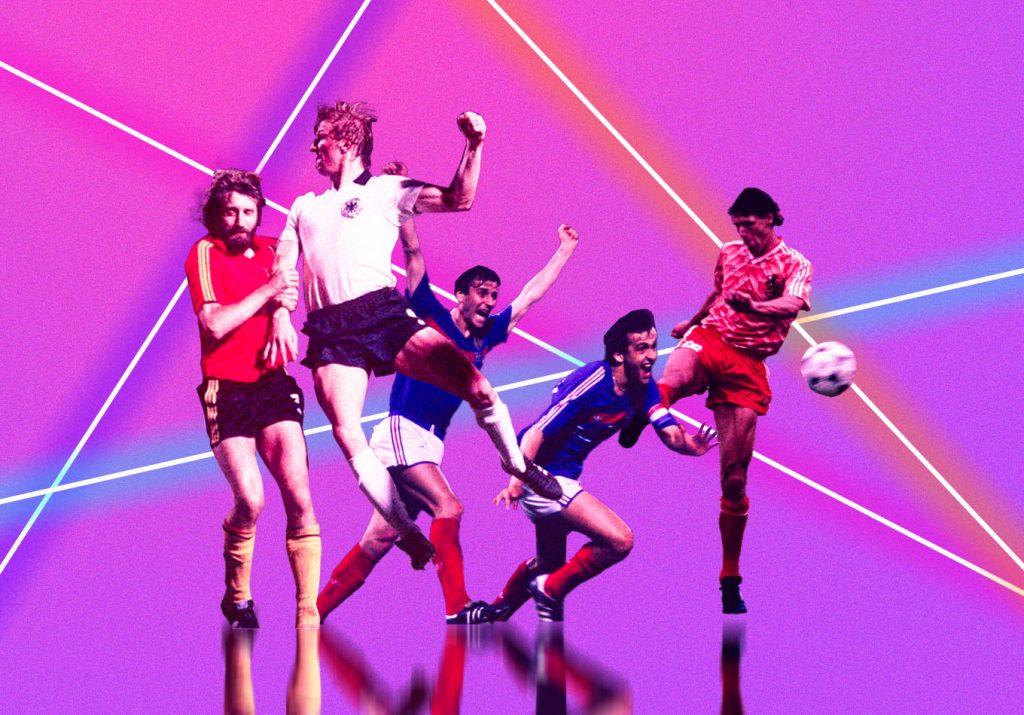 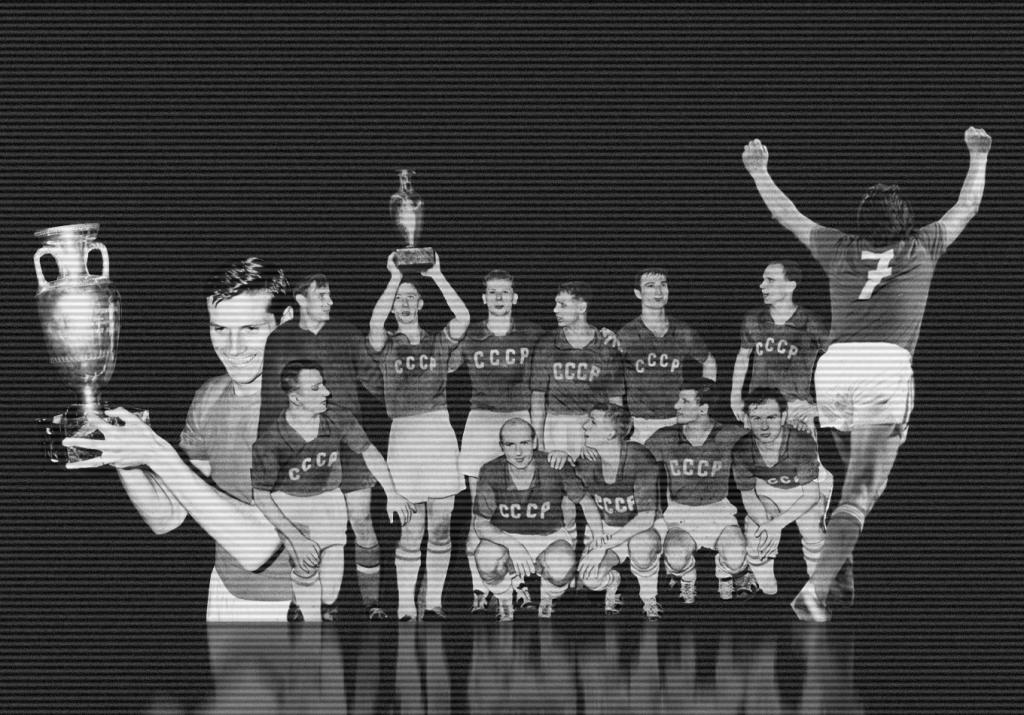