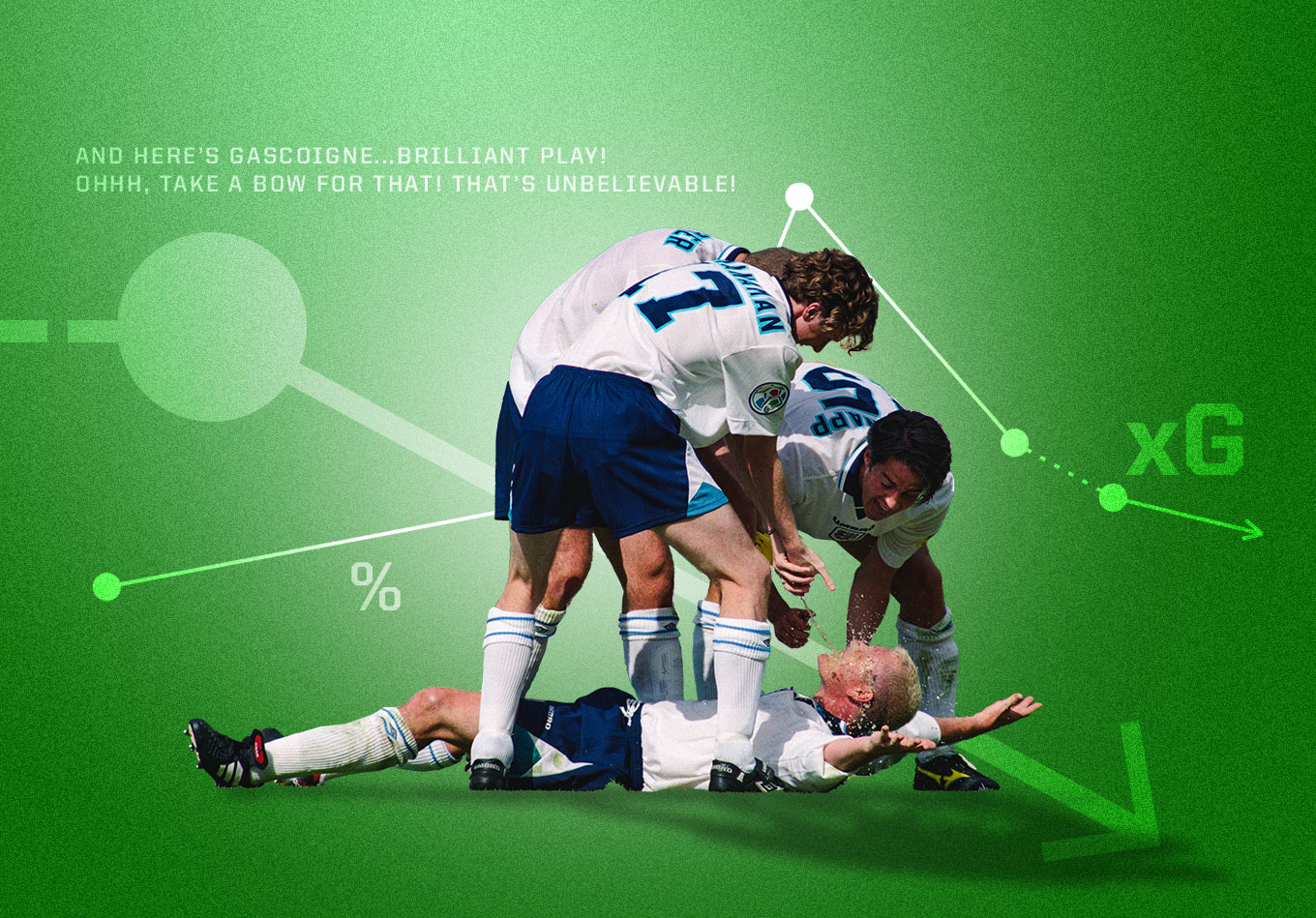 There are a couple of moments that spring to mind when Paul Gascoigne’s England career is mentioned: the tears in Turin and that goal against Scotland.

That goal, scored at Euro 1996, is now 25 years old, but it’s left an indelible mark on what was a glorious fortnight for England, before it ground to halt against the German nemesis. Not that the current crop of English midfield wizards and Gascoigne descendants would remember: Jack Grealish was barely nine months old whilst the likes of Phil Foden, Jadon Sancho and Mason Mount weren’t even on the way.

But let’s go back in time.

After an underwhelming draw against the Swiss, England are left with no choice. Beat the Auld Enemy to set up a group decider with the Netherlands.

On a high after scoring 14 league goals with Rangers – the most prolific club campaign of his career – and being voted Player of the Year by the blue side of Glasgow, the 29-year-old Gascoigne must deliver the goods on home soil.

But first, some context.

The clock ticks into the 78th minute. Scotland win a penalty and, with it, a chance to cancel Alan Shearer’s 53rd-minute opener. Gary McAllister steps up but David Seaman wins the duel, tipping the ball over the bar. The first penalty saved by an England goalkeeper at a major tournament – including shoot-outs – since Ray Clemence at Euro 1980. Relief for England, soon to turn to delirium.

Fresh from his penalty exploits, Seaman kicks the ball down field. The next 10 seconds are about to be a mix of directness, instinct and skill:

2. In the meantime, Gascoigne is still in the centre circle, but he’s already anticipated the opportunity that will present itself five seconds later. He starts sprinting towards the Scottish box…

3. Scotland midfielder Stuart McCall is pointing towards a flying Gascoigne, a ‘someone pick him up please’ gesture. Too little, too late…

4. In a fraternal Tottenham moment, Anderton has seen the run and plays a one-touch pass to the onrushing Gascoigne, one of 13 chances created for Anderton at the tournament, the joint-most alongside Youri Djorkaeff…

5. Gascoigne keeps his composure despite sprinting nearly 40 metres. With eyes in the back of his head (or the sixth sense that all great playmakers possess), he flicks the ball over Colin Hendry with his left foot before a thunderous volley with his right past Rangers teammate Andy Goram. The ball crosses the line exactly 60 seconds after Seaman’s penalty save.

2-0. Cue the dentist chair on a sun-soaked Wembley turf. England’s Euro 1996 campaign had sprung to life.

The move encapsulated the genius that was Gascoigne. Anticipation, vision and skill. Gary Lineker once described him as “the most naturally gifted technical footballer that [I] played with.”

Here is 128 seconds of Paul Gascoigne doing incredible things with a football at Euro 96. Enjoy.

His flick over Colin Hendry was one of four take-ons he completed against Scotland, more than any other player that day. No surprise perhaps that Gascoigne remains the most prolific English dribbler at major international tournaments, with 10 more completed take-ons than Chris Waddle, another master of tricks.

What might come as a surprise though is that, for all its brilliance, this was Gascoigne’s only goal at a major international tournament.

Digging into the numbers, one of the key reasons why Gascoigne hadn’t scored before the Scotland game were his less-than-optimal shooting positions. In fact, his strike was the first shot he’d attempted from inside the box after more than 11 hours of football at World Cup 1990 and Euro 1996. All of his previous attempts had come from range, the majority of them free-kicks. No xG, no party.

It was actually from dead-ball situations that he registered his three assists at major tournaments: two from indirect free-kicks and one from a corner. No decisive final pass from open play but as his involvement stats from Euro 1996 suggest, Gascoigne was a build-up creator and facilitator, with no better illustration than his penultimate pass leading to Alan Shearer’s second goal against the Netherlands.

A key cog in Terry Venables’ England team, Gascoigne missed only 13 minutes of England’s Euro 1996 campaign. More remarkably, all five knockout games in which he featured at major international tournaments went the full 120 minutes (three in 1990, two in 1996). He was a man for the dramatics.

Two weeks later, in what turned out to be his 11th and final game in a major international tournament, Gascoigne came inches away from knocking out Germany with a golden goal, which would have meant a first ever European Championship final for England.

It wasn’t to be and England are still waiting for that elusive final – but the memory of that goal in the Wembley sun shines brightly to this day.