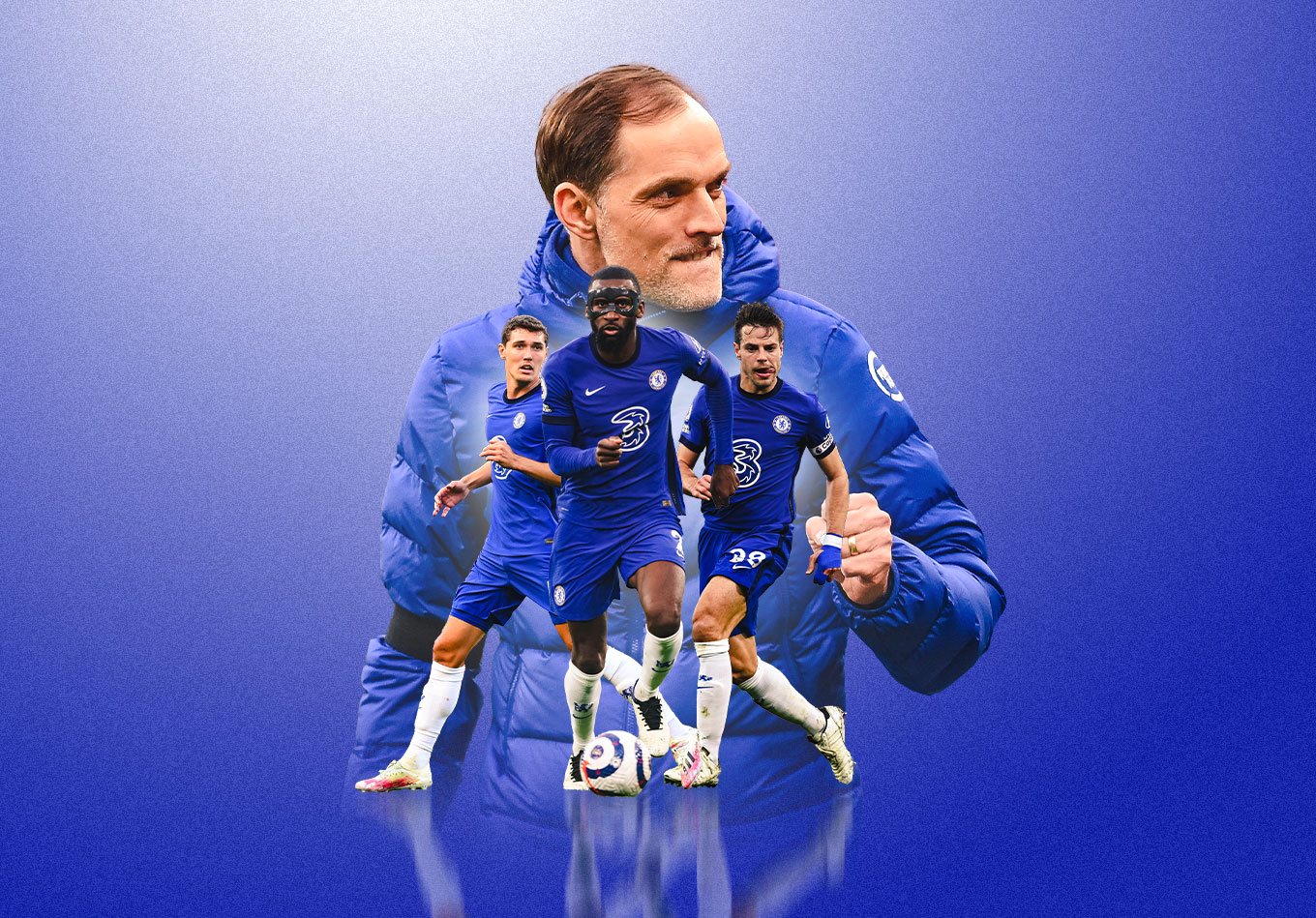 In the final weeks of Frank Lampard’s reign, Antonio Rüdiger went from outcast to scapegoat. He is now Thomas Tuchel’s main man in defence.

Antonio Rüdiger is no stranger to putting himself in difficult and painful situations for the cause, as evidenced when the defensive lynchpin of Thomas Tuchel’s Chelsea revival has sported a protective face mask in recent weeks.

Nevertheless, even as a player who appears to relish a challenge and refuse to back down from a confrontation, Chelsea playing behind closed doors might have done Rüdiger a favour earlier in the year.

The Stamford Bridge faithful, for all the success lapped up during the Roman Abramovich era, are certainly not shy when it comes to voicing their displeasure over an unpopular change in the dugout, of which there have been plenty.

There was the vocal backing for Roberto Di Matteo weeks after his sacking in 2012. Interim boss Rafael Benitez was the villain in that situation but calling out any perceived culprits among a squad often noted for wielding player power has also marked times of tumult.

When Jose Mourinho’s second spell at Chelsea ended with the then-reigning Premier League champions lurching close to the relegation zone in December 2015, he was backed by plenty of fans amid accusations of player betrayal. One banner in the ground famously branded Eden Hazard, Cesc Fabregas and Diego Costa “The 3 Rats”.

Had stadiums been full around the time of Frank Lampard’s January demise, it is possible Rüdiger would have faced similar scrutiny.

“There have been so many nonsense rumours around about me since last week,” he told The Athletic in February, following speculation that urged the Chelsea board to dispense with Lampard. “I’ve never talked with the board about the situation of the coach or on any other topics.”

In a separate interview with Sky Sports, Rüdiger explained he suffered “immense” racist abuse online after Lampard’s sacking, both an indication of the levels of toxicity at play and a deplorable sign of our times.

It certainly did not feel plausible that, in the space of four months, Rüdiger would be arguably the form defender in European football and leading Chelsea’s charge under Tuchel for a pair of major honours, starting in Saturday’s FA Cup final against Leicester.

Indeed, the most remarkable element of Rüdiger being singled out as a man responsible for so many of the ills at Chelsea around the fall of Lampard was how little he had been involved in the first team.

He started two of their first 17 Premier League fixtures before being recalled in the wake of a 3-1 defeat by Manchester City to start back-to-back games against Fulham and Leicester – the latter of which was a 2-0 defeat that effectively sealed Lampard’s fate.

Overall, Rüdiger made nine appearances in all competitions under the former England midfielder this season, with eight of those starts. His 742 minutes on the pitch were dwarfed by first-choice duo Kurt Zouma (1,999) and Thiago Silva (1,552).

Tuchel’s decision to switch Chelsea into a 3-4-2-1 shape obviously did Rüdiger and his fellow centre-backs a favour in the most basic terms of one more slot in the team being available, but the Germany international has repaid his countryman’s faith emphatically. Only club-captain César Azpilicueta has played more minutes in all competitions since Tuchel’s arrival.

In 21 appearances since, he has been involved in a remarkable 14 clean sheets. No defender in the Premier League, or elsewhere in Europe’s top five leagues for that matter, can boast more in this time. Rüdiger has been a stalwart member of a Chelsea side that has kept more clean sheets since Tuchel’s first game than any other club in Europe.

The six goals conceded with him on the field is also the lowest across the continent’s elite divisions for any defender to have started 15 or more games from January 27 onwards, which was the date of Tuchel’s first game in charge – a 0-0 draw with Wolves.

Rüdiger rested up for Wembley in midweek when Chelsea suffered a lacklustre 1-0 home loss to Arsenal. He was an unused substitute for the only other league defeat of Tuchel’s tenure, an unhinged 5-2 collapse versus West Brom after Silva was sent off.

In the 19 Premier League games Rüdiger has not started in 2020-21, Chelsea have conceded 26 goals at a rate of 1.4 per game. With the ex-Roma man in the first XI, this plummets to a barely comprehensible seven in 17 (0.4 per game).

Those seven goals have arrived over the course of 1,530 minutes on the field, meaning Rüdiger has seen a goal conceded every 218.6 minutes. This is the best ratio in the Premier League for any defender to have played 1,000 minutes or more this term, with Manchester City pairing John Stones (194.9) and Ruben Dias (148.1) next on the list – suggesting the Champions League final in two weeks’ time could be something of a cagey affair.

When set alongside his Chelsea central defensive colleagues Zouma, Silva and Andreas Christensen, Rüdiger’s imposing qualities are evident. He has made 29 tackles in the Premier League this season, an average of 1.7 per 90 minutes, with no other member of the quartet averaging above one.

Of course, Rüdiger has starred within a collective recalibration. In the Premier League, Tuchel’s Chelsea have faced an average of 7.8 shots per game at an expected goals (xG) value of 0.6 per match, down from 10.1 and 1 under Lampard.

Chelsea are also pressing opponents more effectively, allowing an average of 10.1 passes per defensive action (PPDA) under Tuchel, behind only FA Cup final foes Leicester and Leeds United across the period in question. This season with Lampard in charge, they averaged 11 PPDA, which was fourth among all Premier League teams.

The improvements have made life a little easier for defenders, but when Chelsea step out at Wembley there will be no mystery over the identity of their standout performer at centre-back – even if he is wearing a mask. Rüdiger has lifted himself off the scrapheap to become Tuchel’s talisman.