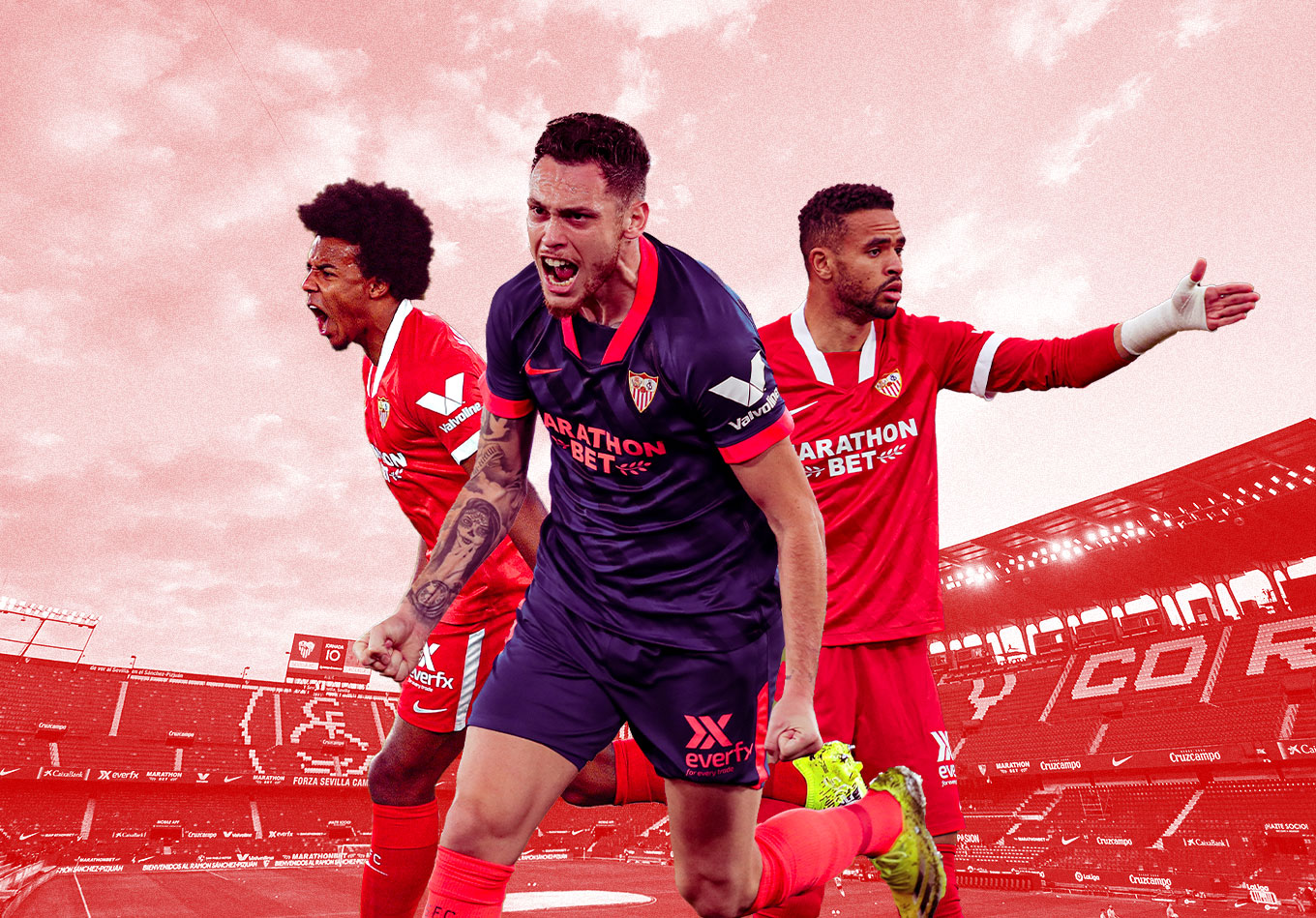 When Sevilla defeated Inter in their gripping Europa League final clash last August, there was a sense of déjà vu for Los Nervionenses. Not only because they were winning that trophy for the sixth time, but also that talk quickly turned to “the next step”.

Sevilla had been here before: Their back-to-back UEFA Cup successes under Juande Ramos were supposed to transform them into a new power in Spanish football, but it didn’t quite happen.

Then the Europa League three-peat with Unai Emery was supposed to elevate them, but in the 13 months that followed the hat-trick-clinching win over Liverpool, Sevilla lost two coaches (Emery and his popular successor Jorge Sampaoli), revered sporting director Monchi and some of their best players.

Monchi returned in 2019 following a well-publicised split with Roma, his reputation having taken a significant hit. The damage has been impressively repaired, however, building a Europa League-winning squad straight away and appointing Julen Lopetegui, the man who got them back into the Champions League.

Looking back, his hiring of Lopetegui was a bold one. Here were two men, both of whom had taken significant flak in their previous jobs, with their own points to prove.

Regardless of Monday’s shock home defeat to Athletic Bilbao, it’s arguable that Sevilla have already taken “the next step” that Monchi spoke about 15 months ago. Never before in a 20-team La Liga season had only three points separated top from fourth with five games to go, yet Sevilla were one of them.

A draw between Atlético Madrid and Barcelona coupled with a Sevilla win over Real Madrid the following day could yet see Lopetegui’s side get themselves back in the hunt for the title. Even if they don’t, 2020-21 has proven Monchi still knows how to find a player and a coach.

Thinking From the Back

Lopetegui came in with his own ideas. Many Sevilla teams over the past 20 years have been exciting to watch with an attacking brand of football. This team are arguably not one of them.

The first thing regular watchers of Lopetegui’s Sevilla will say when summarising this team’s style of play is that they’re not exactly La Liga’s great entertainers. In fact, the 34 matches they’ve played this term have yielded just 76 goals. Only Osasuna, rock-bottom Eibar (both 72) and Getafe (66) have been party to fewer.

Key to this is Sevilla’s effective defence, which has conceded only 27 times. Atlético Madrid (22) and Real Madrid (24) are the two sides with better records. And looking at expected goals conceded in the table above shows that Sevilla’s defence is the most miserly in La Liga. Diego Carlos and Jules Koundé have proven a hugely successful pairing at the base of the defence for well over a year now, but while it was the Brazilian attracting more of the plaudits last term, it’s his young colleague who is capturing the imagination in 2020-21. Indeed, Koundé was one of the players we identified in our transfer target series.

While he may not look it when standing next to the supreme physical specimen that is Diego Carlos, Koundé is an impressive competitor in the air. At just 5-foot-8 he has a great spring and his 93 successful aerial duels is bettered by only three other defenders this term.

But given Sevilla generally spend more time on the ball than their opponents, it’s Koundé’s progressiveness in possession that helps him stand out the most. Lopetegui’s flexible 4-3-3 formation often morphs into more of a 3-4-3 as Fernando drops back, and this allows Koundé to push out from the back, in what has become a key aspect of their system.

The Frenchman makes his influence known in two ways. Firstly, he’s attempted more forward passes (801) than any other outfield player in La Liga, and only central midfielder Dani Parejo (624) can better his 623 successful ones.

This speaks to Koundé’s positive nature when in possession and his contribution to Sevilla’s attack can be highlighted by our sequences framework. Of all centre-backs in the league, only Clément Lenglet (108) has been involved in more open-play sequences that have resulted in a shot than Koundé’s 88. Teammate Diego Carlos is fourth on the list with 73.

This forward-thinking approach is aided by Koundé’s extreme comfort on the ball. His 12 ball carries (dribbling with the ball for five metres or more) followed by a take-on is third best among centre-backs, and just three other central defenders have carried the ball further up-field across the season than him (5,532 metres).

The confidence of Koundé – and Diego Carlos – on the ball helps explain why Sevilla’s 396 pressed sequences against (instances where they have three or fewer passes and the move ends within 40m of their own goal) is the fifth-lowest in LaLiga, while they are the only team not to concede a goal as a result of a high turnover by the opposition.

Sevilla are very effective at playing through a press, best demonstrated by their remarkable 37-pass goal against Valencia in the Copa del Rey in January, and Koundé is essential to that, operating as a kind of defensive playmaker in the backline.

While they managed to keep hold of him despite interest from Manchester City last year, they might struggle to shoo away potential suitors this time around.

The one area where Sevilla have perhaps been weaker in 2020-21 than 2019-20 is in midfield. Losing Éver Banega was always going to be a blow, but replacing him has proven especially difficult.

Ivan Rakitić received something of a hero’s welcome as he returned from Barcelona and, perhaps through nostalgia-tinted glasses, was billed as Banega’s initial replacement with Óscar Rodríguez seen as the long-term heir.

While Óscar has hardly featured, Rakitić has at least been a fairly regular part of the team, often filling the third midfield spot alongside the first-choice pair of Fernando and Joan Jordán.

But despite his adulation, Rakitić’s influence simply hasn’t been anything like that of Banega, who offered far more across the board last season than the Croatian has at the Ramon Sanchez Pizjuan in 2020-21.

Instead, it’s been Jordán who has courted praise after kicking on from an encouraging first campaign at the club. The fact he’s now seemingly in the thoughts of Spain coach Luis Enrique speaks volumes about his progression this year.

A dynamic midfielder, Jordán sets the tempo for Sevilla but also contributes off the ball in a role not too dissimilar to that of Koke at Atletico Madrid, who is only of only six midfielders to have completed more passes than the former Eibar man (2,161).

His 1.97 tackles per 90 may not be remarkable, but among midfielders with at least 15 appearances, it is above the average of 1.65. Tackle numbers are always likely to be lower for players of teams who tend to see more of the ball anyway, but it proves Jordán is by no means only of use on the ball.

That is, however, when he’s at his most comfortable. Granted, he has on occasion been accused of being a sideways-pass merchant, perhaps explaining why as many as 11 central midfielders have been involved in shot-ending sequences with a better cumulative xG value than Jordán (10.4).

However, this is likely down to how Sevilla’s midfield trio all sit quite deep rather than any inherent lack of creativity. After all, Jordán has played a role in 10 shot-ending sequences where he has both created a chance and been involved in the build-up, behind only Frenkie de Jong, Luka Modric, Pedri and Toni Kroos.

He may not be the flashiest of midfielders, but Jordán has proven himself effective and clearly has the trust of both Lopetegui and the rest of the squad.

While replacing Banega will probably be on the agenda for Monchi again at the end of the season, Jordán’s shown he could be worth a shot in a more advanced position.

When Sevilla shelled out roughly €20 million in January 2020 on a striker who had scored just 18 La Liga goals in his first 77 matches, it’s fair to say eyebrows were raised.

Although only 22 at the time, it felt as though Youssef En-Nesyri had already been around for quite a while, but he’d rarely stood out as a particularly outstanding player. Hard-working, sure, but a Champions League-level striker? There were many who had their doubts.

Rather gangly, just as likely to trip himself up as he was to beat his man, the Moroccan scored four goals in his 18 league appearances last term following his mid-season move and he failed to truly dislodge Luuk de Jong, who was widely derided until his Europa League final heroics.

But En-Nesyri has proved a lot of people wrong this season, his haul of 17 league goals so far is the same as his total for the previous two campaigns combined.

Even more impressive is the fact none of them have come from the penalty spot.

He really has led the line in excellent fashion, and his non-penalty xG of 15.1 is the third highest in La Liga, suggesting he is frequently getting into high-quality scoring locations.  When he does get those opportunities, the Sevilla striker is putting them away. Of players to have scored at least 10 goals this season, his 24.3% shot conversion rate is a record that only Marcos Llorente can better.

Playing consistently alongside better players and in a system that seems to accentuate his pace and aerial strength is seemingly paying off. And it’s in the air where he really comes into his own, which marries up well with Sevilla’s most regular source of chances.

Jesús Navas may not be to everyone’s liking, but he’s been reborn as a right-back for Lopetegui, getting himself back into the Spain squad when his career looked to be petering out upon returning from Manchester City in 2017-18.

Navas has created 59 chances from open play this season – the highest number of any player. Only twice before in La Liga has he managed more over a full season, back in 2011-12 and 2012-13 when he played exclusively as a winger.

Navas’ bombing forward from right-back – aided by Koundé’s effective covering behind – is a key facet of Lopetegui’s system. He’s attempted (160), and completed (52), the most open-play crosses in La Liga. Similarly, his 32.5% crossing accuracy is better than anyone else to have attempted at least 50.

This is where En-Nesyri’s aerial strength comes in. He’s only behind Rafa Mir (13) for headed shots on target, while Karim Benzema (six) is the only player with more headed goals than the Sevilla striker (five).

It remains to be seen how much more En-Nesyri has to give, and the same can be said generally for Sevilla, with their 1-0 loss to Athletic raising questions of their ability to break down stubborn opposition.

Ahead of Sunday’s trip to Madrid, our AI predictor gives them a minuscule 0.1% chance of upsetting the established order and clinching their first LaLiga title since the 1940s.

But Madrid aren’t going to set themselves up to nullify Sevilla, they need the win too and will surely look to put as much pressure on their visitors as possible.

But with capable ball-players such as Koundé and Jordán in the side looking to break the lines, such a situation could be conducive to giving En-Nesyri, Lucas Ocampos and Papu Gómez space on the break.

Sevilla couldn’t, could they?