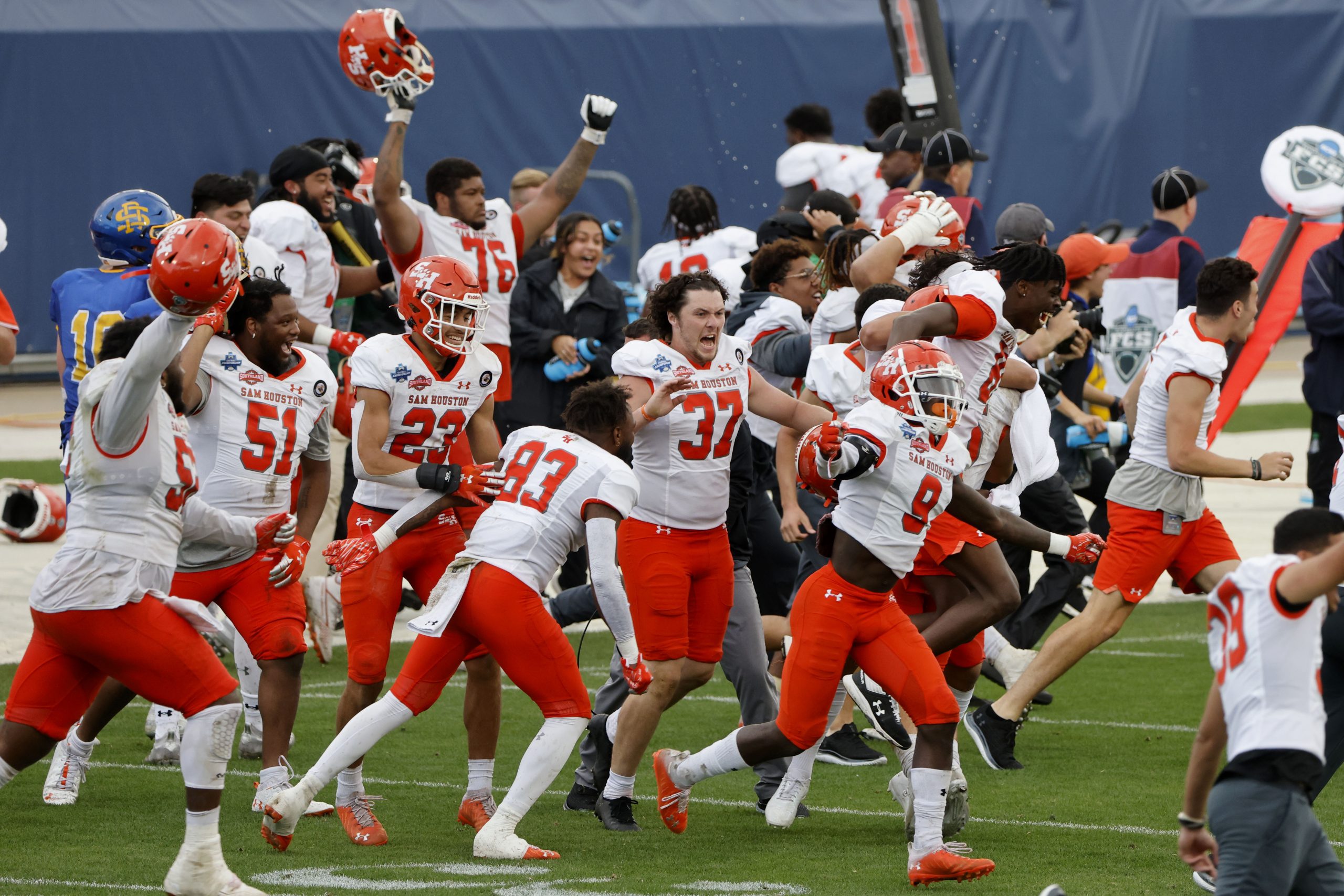 As Sam Houston completed a 10-0 season, seventh-year coach K.C. Keeler became the first coach to capture the FCS title at two different schools. He guided Delaware to the 2003 national title.

“For the rest of our lives, and beyond that, Sam Houston is the national champion,” Keeler said.

2 – Sam Houston wide receiver Jequez Ezzard earned the game’s most outstanding player award after catching (a perfect) 10 passes for 108 yards and, more importantly, scoring two touchdowns for the second straight game, including an electrifying, 35-yard catch-and-weave around defenders for the Bearkats’ first points in the second quarter. He returned a punt return for a touchdown only to have it negated by an illegal block or he could have had three TDs.

3 – Quarterback Eric Schmid threw for three touchdowns in another gutty performance. No other opposing quarterback had more than one against South Dakota State. In fact, the Jackrabbits (8-2) allowed only four passing TDs in their first nine games.

3.95 – South Dakota State quarterback Keaton Heide was thrown into a difficult spot, having to replace starter Mark Gronowski after he was knocked out of the game on the Jackrabbits’ first series with a leg/knee injury that coach John Stiegelmeier called “serious” after the game. Heide struggled to offer a passing threat, averaging 3.95 yards per attempt – just 79 yards on 20 attempts.

16 – Known for its quick-strike offense, Sam Houston, go figure, delivered a grind-it-out game-winning drive, its longest of the season at 16 plays. The longest play over the 65 yards? Schmid’s 10-yard TD to Adeyi.

179 – All the Bearkats did this season was outman, outlast and outscore opponents – their 179-point differential (375 to their opponents’ 196) the best in the FCS.

31:09/28:51 – South Dakota State’s only two losses occurred when it didn’t win time of possession, something Sam Houston held over the Jackrabbits by running 16 more offensive plays. The surprising aspect of the game came at the right time for the Bearkats, who averaged just over 24 minutes in their first three playoff wins.

10/20 vs. 3/12 – Sam Houston was a combined 10 of 20 on converting third and fourth downs into first downs, including twice on fourth down on its final drive. Conversely, the Jackrabbits, who had a 44.8 percent conversion rate on third and fourth downs coming into the game, were a mere 3 of 12 (25 percent), and two of the third-down conversions occurred on a scoreless possession in the third quarter.