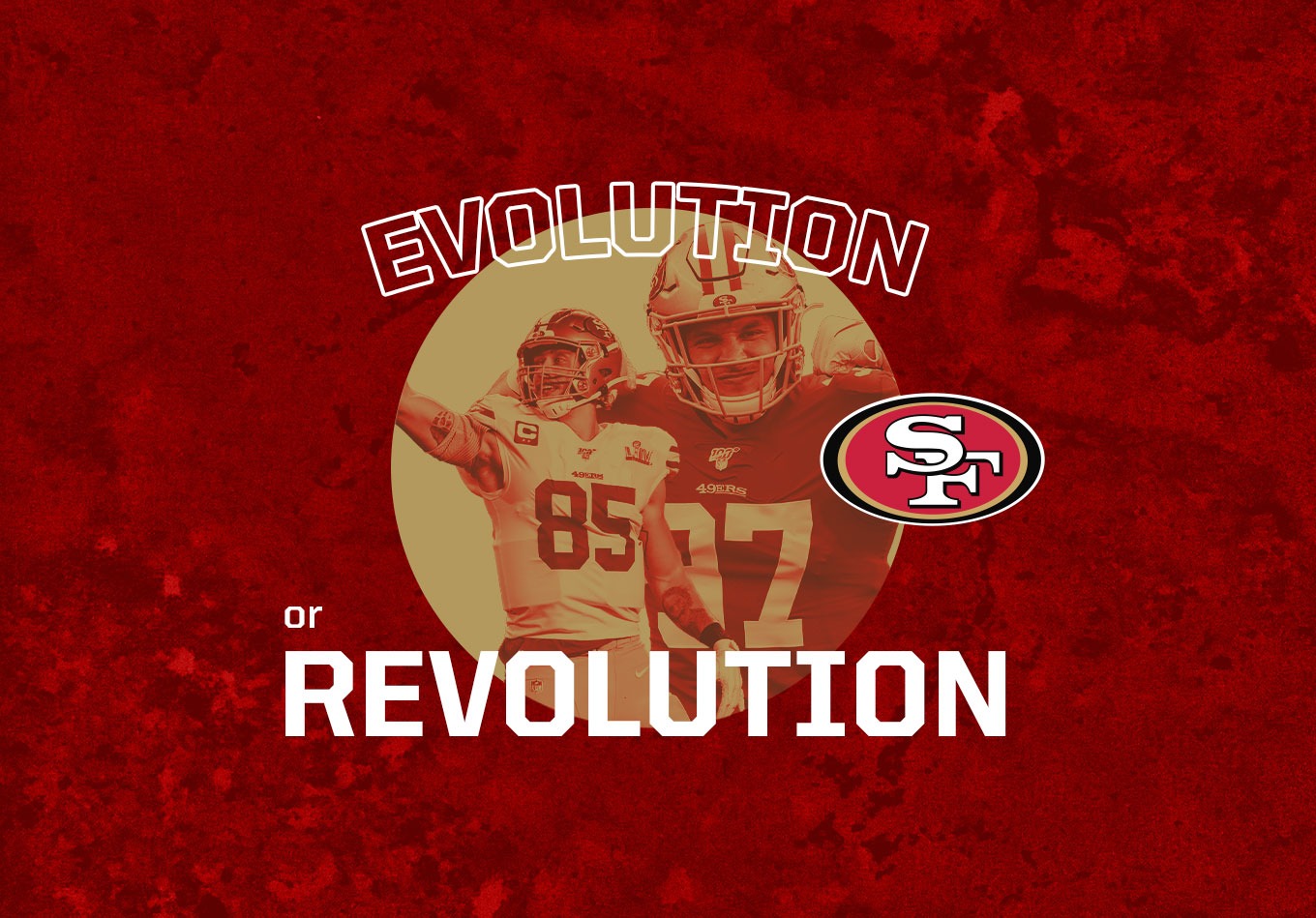 Where the 49ers Are Headed After a Franchise-Altering Trade

For the teams that watch the confetti fall on their opponent at the end of an arduous season, the Super Bowl hangover is no myth.

Any number of teams to have come up short on the biggest stage and then gone on to endure a nightmare subsequent campaign will confirm its legitimacy.

The 2020 San Francisco 49ers experienced perhaps the most severe hangover of any Super Bowl runner-up in the modern era as a remarkable injury crisis hit one of the most talented rosters in the league. They placed 40 of their players on either the injured reserve, physically unable to perform, or reserve/COVID-19 list over the course of the year.

Kyle Shanahan and his team admirably fought an uphill battle to finish 6-10. San Francisco’s response to the season from hell was to make one of the most momentous offseason moves in franchise history, electing to maximize its Super Bowl window and put oft-injured quarterback Jimmy Garoppolo on the clock by trading into the third overall pick in the 2021 draft to choose his successor.

We look back on a season defined by misfortune and the 49ers’ other personnel decisions in a critical offseason as they try to get back to the postseason in 2021 following a franchise-altering trade.

Keeping your starting quarterback healthy is imperative to success on offense, but the 49ers rarely had Garoppolo available at 100% in 2020.

Garoppolo suffered a high ankle sprain in a fateful Week 2 win over the New York Jets and never truly recovered. He only played in six games and did not build a convincing case that he deserves to remain the starter long term.

The former New England Patriot completed 94 of his 140 passes for 1,096 yards, seven touchdowns and five interceptions. Garoppolo’s interception percentage of 3.6 was the third-highest among players to have attempted at least 100 throws.

One of the two players above him on that list was his backup, Nick Mullens (3.7), whose turnovers helped end San Francisco’s hopes of making the playoffs. He committed 16 giveaways, 12 of those coming on interceptions, with no team conceding more takeaway points than the Niners’ 124.

Those turnovers tilted contests in which the undermanned Niners were generally competitive and limited the upside of an offense that still finished in the top half in total offense (15th, 370.1) and passing yards per game (12th, 252.1) despite the absences of Garoppolo, All-Pro tight end George Kittle and wide receiver Deebo Samuel for much of the season.

Yet the fact Mullens still managed to finish the season 15th among qualifying quarterbacks in yards per pass attempt (7.48) is illustrative of the ceiling of Shanahan’s offense. Samuel (12.09) led the league in yards after catch per reception among receivers with at least 10 catches, while no rookie caught more red-zone touchdowns than Brandon Aiyuk (5).

When it is healthy, the Niners’ offense can still be one of the most dynamic in football. However, it requires a durable quarterback who takes care of the ball and, in 2021, will need more of a boost from a running game that was minus NFC championship game hero Raheem Mostert for most of the year.

Ensuring the 49ers possess those offensive necessities in 2021 will be paramount given their top-10 defense faces the challenge of adapting to a new coordinator in DeMeco Ryans.

Ryans’ predecessor Robert Saleh earned a head coaching job with the New York Jets on the back of the efforts of his depleted defense in 2020.

After 2019 Defensive Rookie of the Year Nick Bosa tore his ACL against the Jets, Saleh kept a defense that had to rotate a cast of characters consistently due to injuries and Covid issues in the top 10.

Though the offense’s tendency to turn the ball over consistently put the defense in bad positions, the 49ers were the fourth-best team in the league at keeping opposing offenses out of the end zone.

San Francisco gave up touchdowns on 37 of the 183 offensive drives faced in a season where its opponents had the eighth-best average starting field position in the NFL.

The 49ers’ secondary consistently rose to the task when challenged by opposing passing attacks. They gave up 44 passing plays of 20 yards or more – tied for the sixth fewest in the league.

Their efforts in keeping opposing passing attacks in check were helped by the performances of unheralded edge rusher Kerry Hyder Jr., who compensated somewhat for Bosa’s absence with 8.5 sacks and a combined total of 53.5 knockdowns and hurries (20th in the league). Hyder Jr., however, will be playing against the Niners next season after signing for division rivals the Seattle Seahawks in free agency.

The fact that the Niners had one of the better pass defenses in the NFL despite finishing 22nd in sacks (30), 28th in hurries (144) and 27th in knockdowns (68) speaks to the high level of performance from a secondary that was unexpectedly kept largely intact in free agency.

The 49ers made keeping their own a priority in free agency and they largely succeeded, but trading up in the draft for a potential franchise quarterback is a game-changer.

Mac Jones, second in passing touchdowns (41) and yards per attempt (11.19) in college football last season, is seen as the prohibitive favorite. However, it stands to reason the Niners may want to target a quarterback who can deliver the deep ball from the pocket and do more to create plays outside of structure than a player of Jones’ limited physical attributes.

Dual threats Justin Fields, who was 10th among Power 5 quarterbacks in yards from scrimmage yards (867) across the past two seasons, and Trey Lance, who had 14 rushing touchdowns in his sole season as a starter for North Dakota State, appear significantly better suited to where the modern game is going with their ability to make things happen on the run.

On the free agency front, cornerbacks Jason Verrett, Emmanuel Moseley and K’Waun Williams were all retained on short-term deals and will all be expected to start in 2021. Fullback Kyle Juszczyk and starting strong safety Jaquiski Tartt were also brought back.

San Francisco’s Jenga piece in terms of its offseason plans, however, was Trent Williams, whom they re-signed to a six-year, $138.06 million deal to make him the highest-paid left tackle in NFL history. Williams sits 38th in our 2021 projected offensive lineman rankings at 4.29% better than the league average lineman. Our projected OL rankings are based on combined run block and pass protection data over the past three seasons.

The 49ers unsurprisingly had competition for the eight-time Pro Bowler after he gave up 3.5 sacks and only one after Week 5, but they staved off the Kansas City Chiefs to keep Williams in the building. That provided San Francisco with the flexibility to aggressively pursue its quarterback of the future.

Originally slated to pick 12th overall, the 49ers may have been tied to taking one of the premier tackles in the draft class had Williams left for Kansas City. But his return gave them the freedom to trade the 12th pick and two future firsts to the Miami Dolphins to get up to No. 3 and leave Shanahan and general manager John Lynch facing the defining decision of their tenures.

They have each since insisted Garoppolo will remain the starter in 2021, but to justify parting with such capital, the third overall pick must be a quarterback who can immediately compete to displace him. And one who can elevate the offense to standards Garoppolo’s lack of durability and limitations as a deep-ball thrower – he completed just one of his 10 attempts of 21 air yards or more last year – have prevented Shanahan’s attack from reaching.

It remains unclear which direction the 49ers will go, but it is obvious it is a decision they cannot afford to get wrong. Absurdly poor injury luck turned San Francisco’s chance at redemption for its Super Bowl defeat into a lost season, now the Niners need to select a quarterback who can ensure no more years of a decade in which they look primed to contend go to waste.