Only Mohamed Salah: The Numbers that Crown the Egyptian King | The Analyst 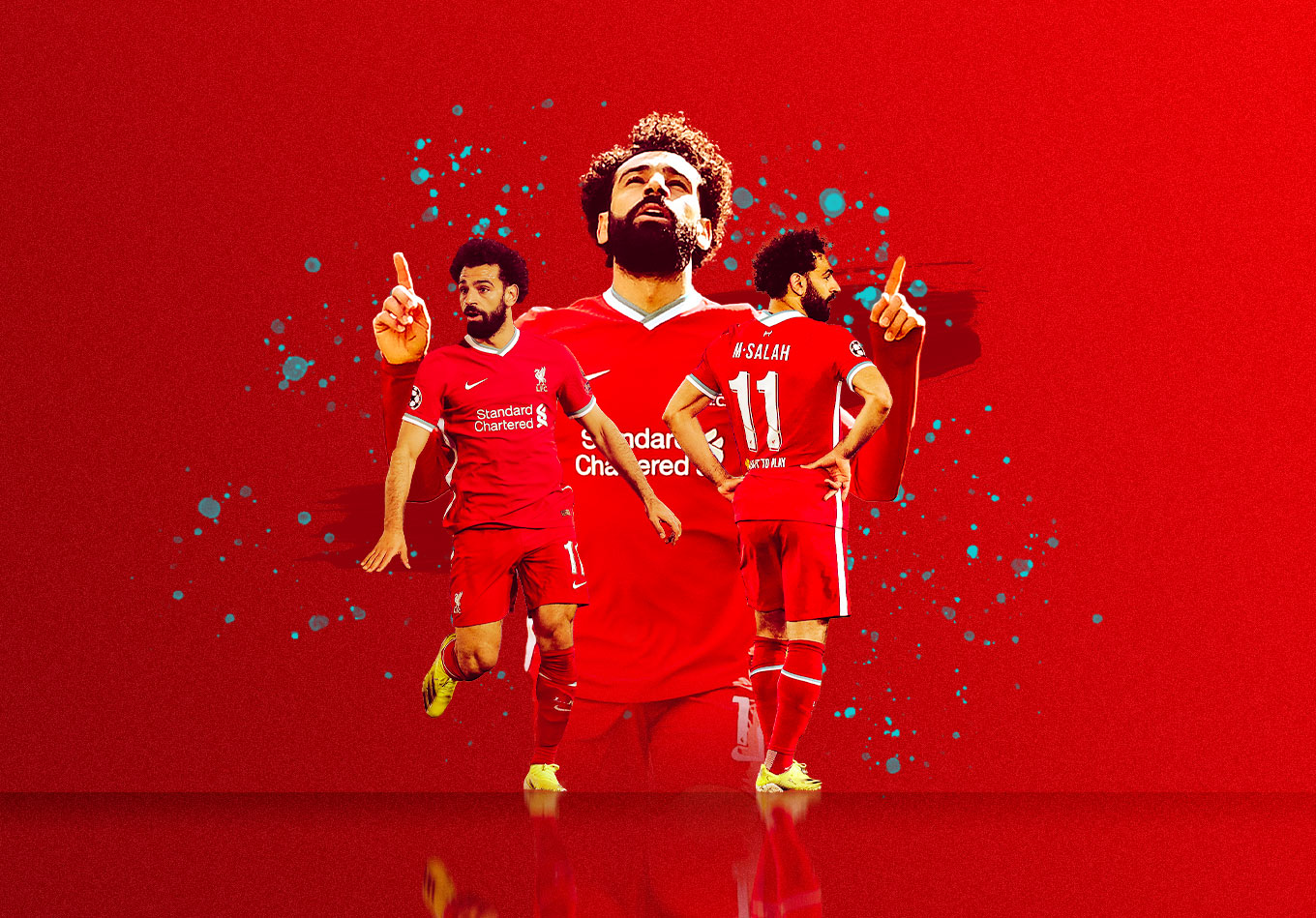 Only Mohamed Salah: The Numbers that Crown the Egyptian King

Mohamed Salah holds hero status in Liverpool, having helped them to their first top-flight English league title in 30 years. Should the Egyptian be considered as one of the all-time Premier League greats?

Certain players are simply unavoidable when it comes to football statistics. How many times do you see Alan Shearer at the top of a table shown on Match of the Day? Or Lionel Messi in the top right corner of a graph comparing goalscorers across Europe. Or perhaps Mick Quinn leading the charts when it comes to best starts to a Premier League career (if you know, you know).

Of late, that player in the Premier League has been Liverpool’s Mohamed Salah.

A quick Twitter search shows that, since he joined the Reds in 2017, the term “only Mohamed Salah has more” has been used over 30 times in Tweets on @OptaJoe alone. And that ignores the dozens of Tweets solely focussing on the catalogue of records he has broken in his time at Liverpool.

Some may point to his record-breaking 2017-18 season spiking his output. Salah amassed 44 goals in all competitions that term, including 32 in the Premier League – an all-time competition record in a single 38-game season. Three years on, and still some call the Egyptian a one-season wonder.

But Salah’s consistency hasn’t received the credit it deserves. The joint-Golden Boot winner in 2018-19, top scorer for the Premier League title-winning side in 2019-20, and joint-top in the Golden Boot race so far in 2020-21.

Put plainly, Salah is the man who always appears. He’s always in the discussion.

Take Harry Kane. The Tottenham striker is the man going toe-to-toe with Salah as this season’s top Premier League scorer – both sat on 19 goals with seven games remaining. If we jump back to Salah’s debut campaign with Liverpool in 2017-18, Salah topped the charts with 32 goals but Kane was his closest rival with 30. It is the only 20-team Premier League campaign to see two different players net 30+ goals.

The two have been goalscoring rivals ever since. Kane has scored 84 Premier League goals since that season. That’s 11 more than Jamie Vardy (73) and 20 more than Raheem Sterling (64). But one player has more: Salah, with 92.

That, of course, includes that wonderful 2017-18 campaign for Salah. But even since then, the Egyptian still continually pips Kane to the post. Since 2018-19, Kane has 54 Premier League goals. Only Mohamed Salah has more (60). Since 2019-20, Kane has netted 37 times in the competition. Only Mohamed Salah has more (38). Pick any season as a starting point since Salah arrived at Liverpool, and he is top of the tree for Premier League goals. So much for that one-season wonder tag.

And it isn’t just Kane who falls slightly behind Salah’s exceptional consistency in this regard.

Pierre-Emerick Aubameyang arrived at Arsenal in 2018 with incredible goalscoring pedigree. He notched 40 goals in all competitions for Borussia Dortmund in 2016-17. Since his Premier League debut in February 2018, he has 63 goals to his name in the competition. Level with Kane in the same period. But Salah is still the only player with more (73).

Aubameyang clearly made a lightning start to his Premier League career, reaching 50 goals in just his 79th appearance in the competition.

Only five players hit 50 Premier League goals in fewer appearances in the competition’s history than the Arsenal striker. A certain Liverpool striker is one of those five – and that’s despite the fact that this includes Salah’s 13 appearances with Chelsea between 2014-2015, in which he scored just twice, hindering his figures.

Aubameyang is not the only player to join the Premier League and hit the ground running while Salah has been at Liverpool. More recently, Bruno Fernandes arrived at Manchester United in 2020, and has since scored 24 Premier League goals.

This time, only two players can better this since his debut in February 2020. Unsurprisingly, those two are Kane and Salah (26 each).

Of course, Fernandes is a midfield player. The Portugal international is also known for his assisting as well as his goalscoring. During 2020, Fernandes both scored and assisted in the same Premier League match on eight occasions. In a single calendar year in Premier League history, there is only one occasion of a player doing so more times. You know where this is going: Salah scored and assisted in nine separate matches during 2018 alone – another outright competition record.

This is another aspect of Salah’s time at Liverpool so far that has gone almost under the radar. The forward is one of the Premier League’s best when it comes to creating chances and assisting teammates too.

Much is made of how it is Liverpool’s full backs, Andy Robertson and Trent Alexander-Arnold, who provide the creativity for Jürgen Klopp’s side. There have been six occasions of a defender assisting 10+ goals in a single Premier League season and Robertson and Alexander-Arnold account for four of those between them (twice each).

They are both undoubtedly pivotal when it comes to carving out goalscoring opportunities for Liverpool. Since they first played alongside one another in September 2017, Robertson has created 181 chances in the Premier League, Alexander-Arnold an even higher 212. Impressive figures. But there’s one name that can top both of them in Liverpool’s ranks during this time: Salah, of course (229).

Ultimately, Salah is both a goalscoring and chance-creating machine. But how does his output stack up historically in the Premier League?

This summer one of the all-time Premier League greats, Sergio Agüero, will be leaving Manchester City – currently the fourth-highest goalscorer in Premier League history.

In fact, of the 73 players to be directly involved in 100 or more non-penalty goals in the Premier League, only two can boast a better per-game ratio than the Argentine. If you’ve read this far into this feature, you get no prizes for guessing who one of those two is.

Yes, Salah with 0.75 per game sits second all-time in Premier League history, behind only Thierry Henry and ahead of Agüero in third.

Salah’s record stacks up in any regard amongst the greats of the Premier League era and beyond. In Liverpool’s club history, only two players – Roger Hunt (144) and Jack Parkinson (153), both of whom played for Liverpool in the second tier – scored their first 100 goals for the Reds in fewer appearances than the Egyptian (159).

Of players with at least 50 league appearances for Liverpool, Salah’s ratio of 0.67 goals-per-game sits him at the very top, ahead of Gordon Hodgson (0.65) and Fernando Torres (0.64).

Ever since he arrived at Liverpool, Salah has been the standout performer in the Premier League. The English top-flight’s answer to Lionel Messi in Spain, to Kylian Mbappé in France, to Robert Lewandowski in Germany, to Cristiano Ronaldo in Italy.

He may not always get the credit as that himself. In 2019-20, he wasn’t named in the PFA Premier League Team of the Year despite ranking second for goal involvements that campaign – a victim of his own sky-high standards of success, perhaps.

But look out for the words “only Mohamed Salah has more” and you’ll see. His record speaks for itself.