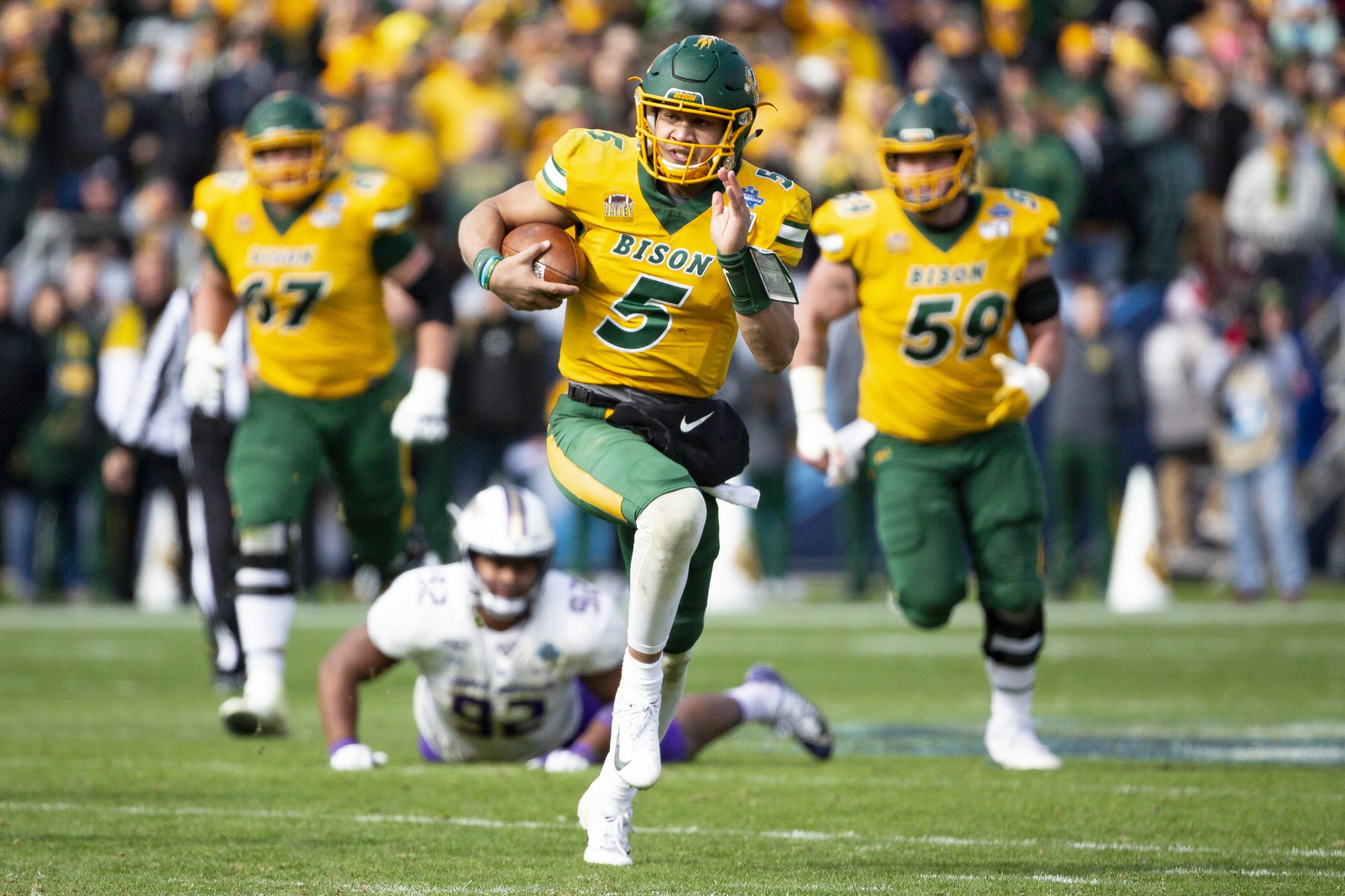 With one full college season to his name but enticingly untapped upside as a thrower and a runner, Trey Lance is the draft’s QB wild card.

Trey Lance took to the field at the Fargodome for the final time on April 19 with an opportunity to state one final case to be the third overall pick in the 2021 NFL Draft. In these unusual times, it’s perhaps fitting that a quarterback with his irregular resume had such a chance.

Behind closed doors at the home of the North Dakota State Bison, Lance threw in front of several teams in his “second pro day,” having shown off his remarkable arm at his first.

The sequel showcase was undoubtedly primarily aimed at impressing Kyle Shanahan, head coach of the San Francisco 49ers, whose trade up to the third overall pick for a successor to much-maligned and oft-injured quarterback Jimmy Garoppolo has given them control of a draft in which the Jacksonville Jaguars and New York Jets are widely expected to select quarterback Trevor Lawrence and Zach Wilson at No. 1 and 2, respectively.

Whether Lance did enough to convince the Niners he should be the third player off the board remains to be seen. However, if he did, then San Francisco would be taking one of the most significant risks in the history of the NFL Draft.

Lawrence, Wilson and fellow quarterbacks Justin Fields and Mac Jones all have varying strengths and weaknesses, but it is Lance who stands as the draft’s ultimate wild card.

Lance will enter the NFL with just one full season of college experience – and an uneven “showcase game” against Central Arkansas last year – after the COVID-19 pandemic pushed the Bison’s 2020 season into this spring. Lance averaged only 18 pass attempts in a run-heavy offense in his sole campaign.

In addition to inexperience, the level of competition is also a question mark against Lance’s name, his 16 games in 2019 coming in the FCS, college football’s second tier to the FBS. Bison alumnus Carson Wentz made the grade in the NFL, at least initially, playing at the same level, but the pithy cliche about college prospects often playing against “future insurance salesmen” is one all too easily applied to Lance.

Yet so impressive were his performances in 2019 that Lance represents an enticing potential project for coaches like Shanahan, and there is significant visual and statistical evidence to suggest he can silence doubts about his inexperience and lack of elite opposition to develop into one of the NFL’s most exciting young quarterbacks.

The raw yardage numbers do not make for spectacular reading for Lance, who finished 2019 with 2,786 passing yards. However, that is more down to the philosophy of the NDSU offense rather than any limitations he has as a thrower.

His completion percentage of 66.9 was 17th across the FBS and FCS, below Fields (67.2) but above Lawrence (65.8), and it could have been markedly higher had Lance been more consistent with his downfield accuracy.

Blessed with arm strength that makes throws to all levels of the field available to him, Lance can hit on the deep ball with unerring placement, but, unsurprisingly for a player of his limited experience, underthrows and overthrows were also a regular feature of his time with the Bison.

While that may be a concern in terms of his immediate impact at the next level, the fact he still connected on passes at that rate while often missing downfield is illustrative of the room to grow that has many believing he could end up being the best pro of this draft crop of quarterbacks.

A calm head on young shoulders

Lance’s composure and his discipline in taking care of the football should make his transition to the pros smoother and potentially more expedient.

The standout number from his 2019 campaign was his interception tally. Zero. No other quarterback in the FBS and the FCS with a minimum of 200 pass attempts avoided throwing the ball to an opposition player.

That is not to say there weren’t instances in which Lance was fortunate not to be picked off, and he was finally intercepted in his sole 2020 appearance, but the consistency of his decision-making combined with the fact his blemish-free season came in a year when he also accounted for 42 touchdowns played a significant role in his rapid rise up draft boards.

Fourteen of those scores came in an area of the game where his case for having the edge over the rest of the first-round quarterbacks is most impressive.

A devastatingly effectively runner in the open field, Lance is a frightening dual-threat who builds speed with long strides and uses every inch of his imposing 6-foot-4, 226-pound frame to inflict punishment on opposing defenders and barrel them over for extra yardage.

Only four quarterbacks across the FBS and FCS had more rushing touchdowns than Lance’s 14, while his rushing average of 6.5 was fifth among signal callers to have registered at least 100 rushing attempts.

Lawrence’s 2019 rushing average was only a yard shy of Lance’s as the Clemson phenom added nine scores on the ground.

Fields had 10 rushing touchdowns in his sophomore campaign, with that duo each continuing to excel as runners in 2020 as Wilson also produced a demonstration of his athletic upside last season with 10 scores (Lawrence had eight and Fields five).

But none of that trio has proven as physically dominant as Lance when he gets into space and it is the blend of his upside as a rusher and the variety of high-difficulty throws at his disposal that makes the prospect of putting him at the helm of a pro offense such an enticing one.

The determination the 49ers and other teams such as the Atlanta Falcons (fourth overall pick) are eyeing a quarterback in the draft must make is whether Lance’s astronomical ceiling is worth the risk of investing in a player whose bridge from high school to the pros was essentially one season of bullyball against FCS competition.

Regardless of how his career ultimately turns out, Lance’s diverse and dynamic skill set ensures the team that decides to take that gamble is in for a thrilling ride.