Pick 5: Which of the Prized Quarterbacks Are Lottery Tickets Waiting to Be Cashed? | The Analyst 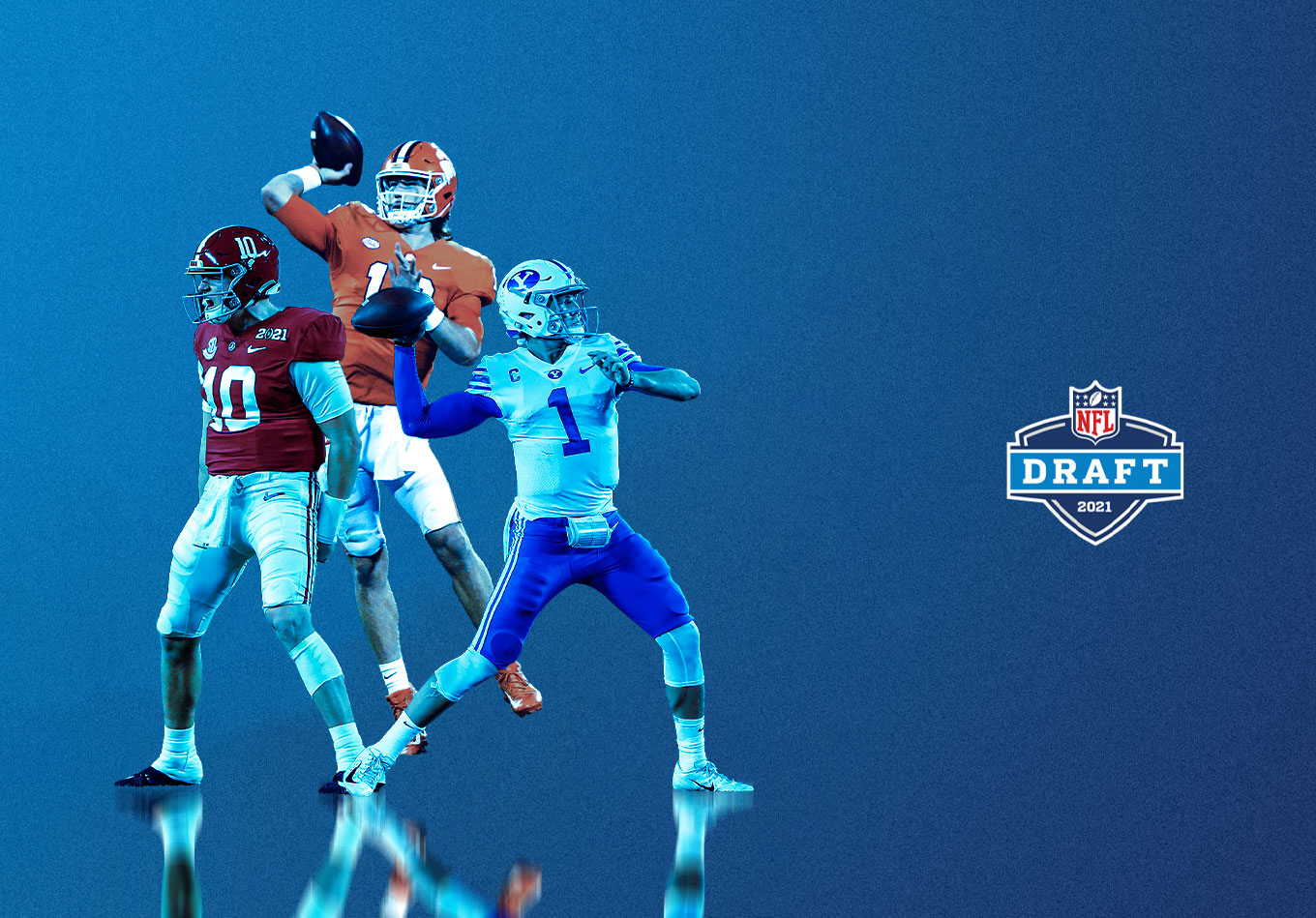 Leading up to Thursday’s NFL draft, we’re taking a look at the most interesting players at each position. Today, we break down the five QBs who could be selected in the top 10.

The NFL draft offers a stage for sporting drama, yet there is seemingly no suspense surrounding the identity of the player whose name will be announced first by commissioner Roger Goodell.

Trevor Lawrence was the presumptive No. 1 pick long before he wrapped up his college career after a third and final season with Clemson. There was no need to return for a senior year – the time has come to head to the next level.

The Jacksonville Jaguars are waiting to select what they hope will be their long-term answer at quarterback, and someone who can help turn around the fortunes of a team that finished with a dismal 1-15 record in 2020.

Whether they were ‘Tanking for Trevor’ or not, their reward for consistently losing is a shot at one of the most talked-about prospects at the position in the past decade. For a franchise with just one winning season in the previous 13 years, the presence of Lawrence offers a fresh start and immediately changes expectations.

New head coach Urban Meyer has not even bothered to try to hide the fact either: Lawrence will become a Jaguar on April 29.

So, can a serial winner live up to the hype and help the Jags move forward? Is he by far and away the top prospect in this QB-heavy draft? How do the others compare?

Let’s break it all down:

Lawrence’s completion rate also continued to rise the longer he played at the college level. After hovering just above 65% during Years 1 and 2, he was successful on 69.2% of his attempts in 2020.

That number barely dropped when it came to throwing in the red zone (68.5%) as he ranked second in the FBS across the period of 2018-2020. However, he completed 56.8% of his attempts in third-down situations during that span – only good enough for 78th out of those to have at least 100 attempts.

Pressure is coming in many different forms for Lawrence, who will have to cope with not just the expectations of a new team’s fanbase but also the national spotlight. Going first overall comes with added pressure in itself, but with an opening round set to see a bevy of young quarterbacks selected in the early stages, there will inevitably be comparisons to his fellow rookies.

Then there is also the added focus awaiting him from NFL defenses. Jacksonville gave up 44 sacks in the 2020 season, one more than Lawrence endured in his entire career at Clemson.

But teams should be aware of the risks that come with sending extra rushers at Lawrence after he completed 63.8% of his pass attempts when blitzed. That number ranked him eighth in the FBS across his three-year stint, making the message clear to opponents: get home or be prepared to pay the consequences.

If a growing amount of media speculation can be taken as fact, the New York Jets appear locked in to making Wilson their latest attempt at finding a franchise signal-caller when they pick at No. 2.

So, why has Wilson, a fringe prospect leading into his stellar junior season with the Cougars, presumably vaulted to near the top of a quarterback-heavy class that also features three other likely first-round choices in Ohio State’s Justin Fields, North Dakota State’s Trey Lance and Alabama’s Mac Jones?

Joe Burrow had a similar rise just a year ago, going from a projected late-round prospect to the top overall pick on the strength of a record-setting final season at LSU. Wilson’s 2020 campaign compares quite favorably with the final collegiate seasons of the last three No. 1 overall selections – Baker Mayfield, Kyler Murray and Burrow.

Wilson’s performance in three of those areas are a near carbon-copy to those of Mayfield and Burrow, who also excelled on deep throws, play-action situations and within the red zone. Mayfield has been a popular comp to the Utah native, and for good reason as they’re similarly sized and play with an evident abundance of bravado and swagger.

That gunslinger mentality often worked against Mayfield in his second NFL season, when his 21 interceptions were the second highest in the league in 2019, but a more judicious approach in 2020 led to a much higher rate of efficiency and more importantly, greater team success as the Cleveland Browns nearly doubled their win total from six to 11.

Wilson’s numbers, in fact, trump those of Lawrence, who finished no higher than 19th among qualified FBS quarterbacks in those categories.

Now, that still doesn’t necessarily mean that Wilson should be viewed as the superior prospect. Lawrence, much like the three quarterbacks mentioned above, faced an overall higher level of competition than his draft counterpart, who didn’t go up against a single Power Five team during BYU’s breakout 2020 season.

Wilson did face four major conference teams as a sophomore in 2019, and while his overall stats in those games (997 passing yards, 62.8 completion percentage, three touchdowns, three interceptions) weren’t overwhelming, he did lead the Cougars to wins at Tennessee and against Southern California with turnover-free efforts in each.

While the sample size is still small, it’s enough to suggest he can succeed against quality opponents at the next level if he plays within himself.

Jones was not universally pegged as a first-round pick. Not until the San Francisco 49ers moved up to three, at least. Then Kyle Shanahan’s reported interest in the Alabama quarterback prompted a reappraisal of his talents.

If the Niners were willing to make a blockbuster trade, parting with two future first-round picks, just to move into position to take Jones, how good must he be?

Plenty around the NFL still are not convinced, while the smoke and mirrors surrounding the draft mean there remains no guarantee Jones goes at No. 3 or even in the top 10.

Jones led Alabama to a 13-0 record in 2020 after succeeding Miami Dolphins first-rounder Tua Tagovailoa at the QB position. He threw for 4,500 yards – the most in the FBS – and trailed only Florida’s Kyle Trask (43) with his 41 passing touchdowns.

He also led the FBS in completion percentage. Of his 402 throws, 311 were caught – another high – for an exceptional 77.4%. These figures could have been even more impressive, too, with 323 of his balls considered ‘catchable,’ though Jones only ranked 44th in the FBS for air yards per attempt at 8.43.

But where Jones particularly stood out was with his throws in pressure situations.

But whereas Wilson, Fields, Lawrence and Lance are set to join the burgeoning ranks of dual-threat quarterbacks in the NFL, Jones is more of a pocket passer.

At Alabama, where he could hand the ball off to FBS-leading running back Najee Harris, Jones had just 35 carries last year and scored a single rushing touchdown. The majority of these runs were short bursts to steal first downs as he averaged 0.4 yards per attempt with the longest carry going for 14 yards.

Lance will enter the league with just one full season of college experience – and an uneven ‘showcase game’ against Central Arkansas last year – after the coronavirus pandemic pushed North Dakota State’s fall season into the spring of 2021.

In addition to inexperience, the level of competition is also a question mark after all those games came against FCS competition.

Yet his performance in 2019 was so impressive that Lance represents an enticing potential project and there is significant visual and statistical evidence to suggest he can silence doubts about his inexperience and lack of elite competition and develop into one of the NFL’s most exciting young quarterbacks.

The raw numbers aren’t spectacular with 2,786 passing yards in 2019. However, that has to do more with NDSU’s philosophy on offense than any limitations he has as a thrower.

Lance ranked eighth among all quarterbacks in the FBS and FCS with 9.71 yards per pass attempt in 2019, ahead of Fields (9.25) 13th and Lawrence (9.00) 18th. His completion percentage of 66.9 was 17th across the FBS and FCS, below Fields (67.2) but above Lawrence (65.8), and it could have been markedly higher had Lance been more consistent with his downfield accuracy.

Blessed with arm strength that makes throws to all levels of the field available to him, Lance’s threw for 28 touchdowns and zero interceptions in 2019. No other quarterback in the FBS and the FCS with a minimum of 200 pass attempts avoided throwing the ball to an opposing player.

That is not to say there weren’t instances where the 6-foot-4, 226-pound Lance was fortunate not to be picked off, and he was finally intercepted in his sole 2020 appearance. But the consistency of his decision-making combined with the fact his blemish-free season came in a year where he also accounted for 42 touchdowns played a significant role in his rapid rise up draft boards.

Only four quarterbacks across the FBS and FCS had more rushing touchdowns than Lance’s 14, while his rushing average of 6.5 was fifth among signal-callers to have registered at least 100 rushing attempts.

Lawrence’s 2019 rushing average was only a yard shy of Lance’s as the Clemson phenom added nine scores on the ground. Fields had 10 rushing touchdowns in his sophomore campaign, with that duo each continuing to excel as runners in 2020. Wilson also produced a demonstration of his athletic upside last season with 10 scores (Lawrence had eight and Fields five).

But none of that trio has proven as physically dominant as Lance when he gets into space and it is the blend of his upside as a rusher and the variety of high-difficulty throws at his disposal that makes the prospect of putting him at the helm of a pro offense such an enticing one.

It appears as though both the Jets and 49ers are among Fields’ doubters. As previously mentioned, the Jets are expected to take Wilson with the second pick, while the 49ers, following their massive trade up from 12 to 3, are reportedly deciding between Lance and Jones.

Critiqued by some for holding on to the ball too long while waiting for his reads to come open, Fields had an average snap-to-release time of 2.81 seconds in 2020. While that is considerably slower than Lawrence (2.36) and a fair way behind Jones (2.55), it is slightly faster than Wilson (2.82).

Why is that significant? Because Wilson received regular praise for his ability to get the ball out quickly and accurately during his time at BYU.

Beyond the time it took to get rid of the ball, the biggest debate around Fields pertains to how he works through his progressions to find the open man. His interceptions did double from three in 2019 to six last year and his pickable pass percentage of 3.69 was the worst of the first-round quarterbacks to have played in the Power Five, but it was not miles behind Lawrence (3.38).

In 2020, Fields recorded a well-throw percentage, which measures the number of passes that were not poorly thrown, of 80.18. That number was inferior to Lawrence, who led the Power Five at 84.31, and Jones (83.21). However, of quarterbacks with at least 200 pass attempts who averaged 10 air yards or more per attempt last season, it was second only to Sam Howell of North Carolina (81.31).

Additionally, Wilson (3.53) was the only QB of the four to post a better pickable pass percentage on those attempts than Fields (7.84).

Blessed with the elusiveness to evade free rushers in the pocket, the ability to escape and make sensational off-platform throws on the move and speed in the open field that saw him rush for 1,539 yards and 19 touchdowns in college, Fields has the ideal athletic profile for the modern NFL.

Jones and Wilson outperformed him in some areas in their breakout 2020 campaigns but no quarterback in the class other than Lawrence can claim to have enjoyed the Fields’ level of success over the course of more than one season among college football’s elite.