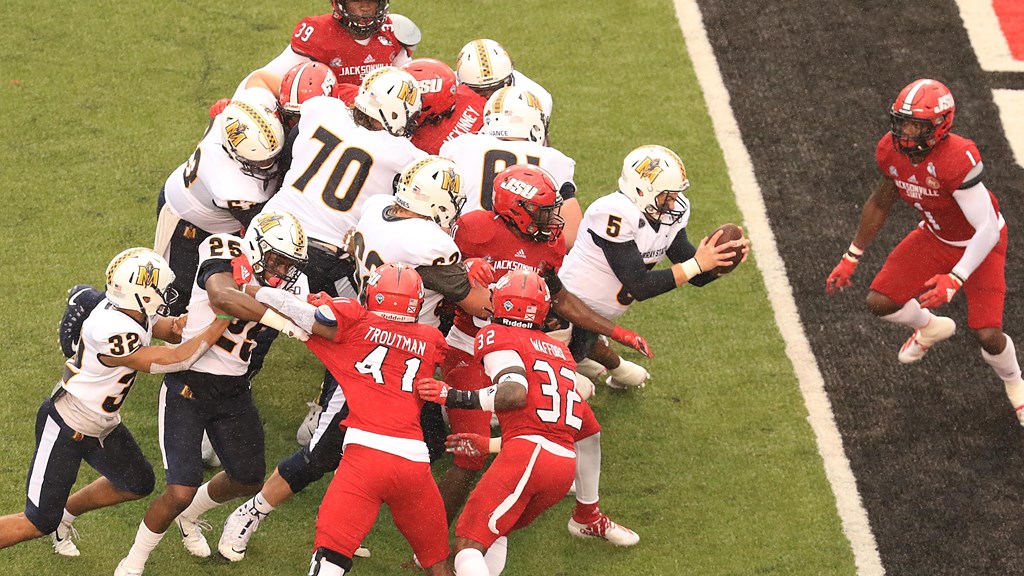 Starts and stops off the field have been a big part of the FCS spring season, but close action on the field also has been a defining characteristic.

A sizzling 49 percent of matchups between conference teams have been decided by one possession (eight points or less), with many more games in doubt until the fourth quarter.

More tight action is expected this weekend as conference schedules continue to wind down with so much at stake.

You really do have to throw the records out the window and instead embrace how the most-played series in college football means everything to these two arch-rivals, who since their first meeting in 1884 have played in every year except 1896 and 2020. Lafayette holds a 79-71-5 series lead heading into the 156th matchup, although both teams have a better record as the road team and the host Leopards haven’t defeated Lehigh at Fisher Stadium since 2006. Lehigh’s struggling offense doesn’t have a run over eight yards or a touchdown in two spring games. The Mountain Hawks must protect quarterback Cross Wilkinson against Lafayette defensive end Malik Hamm, the 2019 Patriot League defensive player of the year who has 29.5 career tackles for loss, including at least one in 19 of his 25 games.

The Big South’s automatic bid to the FCS playoffs is on the line between two programs that are a combined 33-3 in conference since the start of the 2017 season, with each loss against each other. In the last four matchups, the winning team has surpassed 500 offensive yards and not committed a turnover. Kennesaw’s triple option offense has averaged an FCS-high 327.1 rushing yards per game since its inaugural 2015 season, and an even better 386.4 yards versus Monmouth. The Owls have attempted only 18 passes in their first 4-0 start in program history, but are on their third different starting quarterback, redshirt freshman Xavier Shepherd, due to injuries. Monmouth has a true freshman behind center in Tony Muskett and boasts a workhorse in running back Juwon Farri (57 carries, 243 yards, seven TDs). The Hawks’ only loss in their last 19 games at Kessler Stadium occurred against Kennesaw in 2018.

NDSU, playing for the first time in three weeks due to COVID-19 issues, likely faces a must-win as it pushes for a 10th straight MVFC title. Rival UNI is probably out of the playoff picture, so the Panthers are probably playing for a winning record in their final game, something they’ve had in 16 of coach Mark Farley’s first 19 seasons. The defining matchup could be NDSU’s conference-leading rushing offense (218.8 yards per game) versus UNI’s No. 2 rushing defense (102.2 ypg). The Bison will want a lot of Hunter Luepke off a career-best outing (28 carries for 190 yards and three TDs versus North Dakota on March 20). UNI is expected to have No. 1 QB Will McElvain back in the lineup after missing two games. Big foots abound with NDSU punter Garret Wegner owning a 47.2-yard average (third in the FCS) and UNI’s Matthew Cook having made 13 field goals (tied for the most in spring games).

The NEC’s 25th season has come back to the two teams that played in the conference opener (Duquesne posted a 30-27 win at home on March 7), but this time they’re meeting in a first-ever championship game, which decides the automatic playoff bid. In the first meeting, Sacred Heart RB Julius Chestnut had 209 yards from scrimmage and four touchdowns, jump-starting a three-game spring season in which he’s No. 1 in the FCS in rushing yards per game (181.3) and TDs (10). He’s gone over 100 rushing yards in 15 of his last 18 games. Duquesne has won the last six meetings, surpassing 200 rushing yards in each of the last four. In last month’s matchup, QB Joe Mischler accounted for three TDs and RB Garrett Owens had 172 scrimmage yards and a TD catch. The Dukes’ national ranking this week is just their second in program history after being No. 21 in the final 2018 Stats Perform poll.

The winner will claim its ninth all-time OVC title as well as the conference’s automatic bid to the playoffs. Jacksonville State has owned the series, winning the last six meetings and 15 of 17 all-time, including 7-1 on the road. QB Zion Webb has done an excellent job this spring in replacing the injured Zerrick Cooper, and the Gamecocks’ OVC-leading defense hasn’t allowed more than 80 rushing yards or three yards per carry in eight straight games. Murray State has been resurgent under first-year coach Dean Hood, already with one more win than in 2019 (4-8). One difference-maker is a drop from 27 sacks allowed in 2019 to just two this season. That’s boosted QB Preston Rice, who has accounted for 13 TDs (seven passing, six rushing). Aaron Baum has made his last eight field-goal attempts, including a 58-yarder against Eastern Illinois two weeks ago.