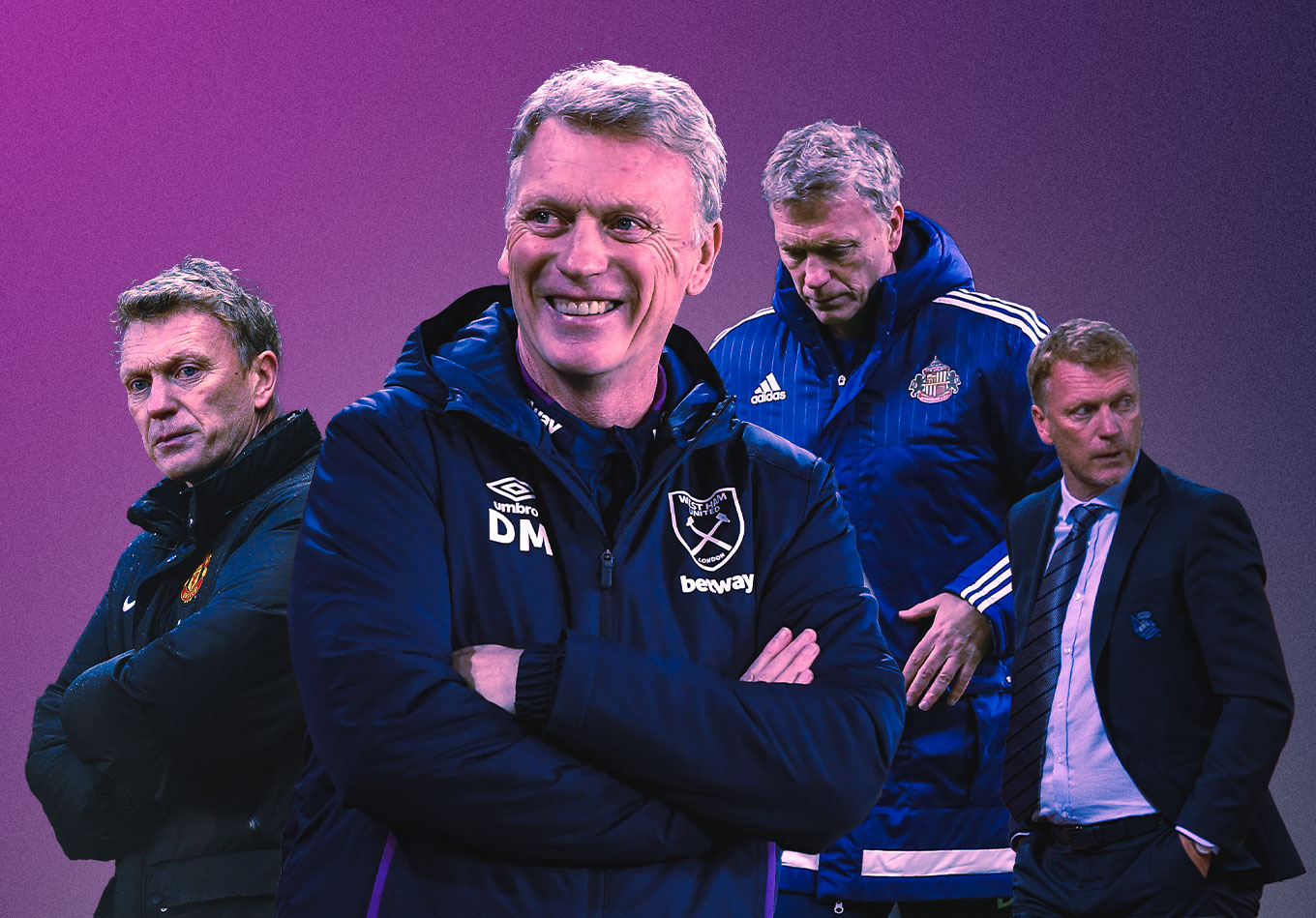 It’s seven years ago to the day that David Moyes was sacked as Sir Alex Ferguson’s successor at Old Trafford. He’d lasted less than a year in the post. But now, with Champions League qualification within touching distance for West Ham, it’s only fair to ask: does he deserve to be held in higher regard?

“They are trying,” said a weary Gary Neville. “This is it.”

The former Manchester United captain was responding to Sky Sports commentator Martin Tyler, who suggested the Red Devils might show a little more pluck during a miserable 2-0 defeat to Everton in April 2014.

That game was the final straw when it came to the future of manager David Moyes. The limp performance against his old club meant the reigning Premier League champions could not mathematically finish in the top four. The embarrassment – and the loss of Champions League income – was too much to bear.

On April 22, seven years ago, Moyes was sacked just 10 months into a six-year contract as Alex Ferguson’s successor. His 34 league games in charge had yielded 17 wins, 11 defeats and a points-per-game average of 1.68, the lowest of any United manager in the Premier League era. In all competitions, he won just 27 of his 51 games in charge.

It was a record-breaking season for all the wrong reasons. United finished on 64 points, their lowest full-season tally in the Premier League era and their lowest finish. At the time, it was the worst title defence of any Premier League side in history, and it meant they failed to qualify for the Champions League for the first time since 1995.

There was also a first home loss to Newcastle United since 1972, to West Brom since 1978 and to Stoke City since 1984. They were beaten home and away by Everton for the first time since 1969-70. Most damning of all was their return against the big six. They won one of 10 of those games in 2013-14, losing home and away to the top two, Manchester City and Liverpool.

A parting of the ways became inevitable, and United, three managers later, are still waiting for a meaningful shot at their 21st top-flight title. There were more problems for Moyes, too, at Real Sociedad and Sunderland. It makes his transformative work at West Ham, turning relegation-battlers into top-four contenders, all the more remarkable.

It also begs the question: has history been unkind to Moyes?

‘You were the chosen one!’

Few United sympathisers were arguing the case for Moyes to stay after Leighton Baines and Kevin Mirallas condemned them to defeat at Goodison Park – apart from Neville, who said the idea of sacking him in his first season was “foreign.”

Neville would later insist United had been the architects of their own mismanaged and relatively barren years since Moyes departed, with progress often fleeting at best. He’s not wrong.

Ferguson won 70.2% of his 748 league games in charge at Old Trafford, and none of his successors have matched that record, with Jose Mourinho (66.2%) and Louis van Gaal (66.0%) closest. At 57.7%, Moyes does not even boast the worst such ratio: that figure belongs to Ole Gunnar Solskjaer (57.1%), a man given substantially more patience by the United hierarchy than Moyes was.

It’s also often forgotten that their best performances under Moyes came in the competition in which he had no experience. United won five of their 10 Champions League games in 2013-14, a record bettered only by Mourinho (eight out of 14) among Ferguson’s successors, as they reached the quarter-final stage – something they have only managed to do once since.

The unenviable task of following Ferguson had the added complication of the squad not quite being up to standard. United’s greatest manager had squeezed one more title out of a group of players whose best years were mostly behind them and who were buoyed by the singular brilliance of Robin van Persie, who plundered 26 goals and nine assists in 38 league matches in 2012-13.

Under Moyes, Van Persie’s output fell dramatically as injuries took their toll: He scored only 11 times and set up a further three in 18 games, while his chances created per 90 minutes plummeted from 2.05 to 0.98.

With the old guard labouring and the squad overhaul poorly handled by new executive vice-chairman Ed Woodward, it sometimes felt like Moyes was fighting a losing battle from the off.

In November 2014, Moyes was handed a breath of fresh air via an 18-month contract at Real Sociedad to succeed Jagoba Arrasate. Spain never quite suited him – perhaps living in a hotel didn’t help – and he was sacked almost exactly a year later, after winning just 12 of 42 games in charge.

However, Moyes was, to some extent, burdened with unfair expectation. La Real had won just two of their first 11 La Liga games in 2014-15 before he arrived and three points off the bottom. Moyes guided them to a safe, if not spectacular 12th placed finish. That first campaign included a 1-0 win at Anoeta in January over Barcelona, who would go on to win the treble that term. Looking at the league table since Moyes’ arrival in November 2014 until the end of that season sees Sociedad sit bang in the middle of the pile in tenth spot.

Yet the demand for a return to European football was significant and, despite a strong transfer window that included the signing of Asier Illarramendi back from Real Madrid, Moyes could not inspire the performances he wanted. In the end, he became the second Real coach in a row to leave after only two wins in the first 11 league games of a season – and they were against the bottom two clubs.

It’s perhaps not surprising that, when Moyes returned to the Premier League with Sunderland in July 2016, he sought to temper expectations. Sam Allardyce had led the Black Cats to survival – by just two points – the season before and it appeared Moyes wanted fans to be realistic.

Unfortunately, his pragmatism came across as overly negative to a fan base desperate to see him build on Allardyce’s work. A poor transfer window didn’t help, either, as old Everton stalwarts such as Steven Pienaar and Victor Anichebe arrived looking well beyond their best and sizeable sums were spent on the likes of Papy Djilobodji, who was on the winning side just three times in 18 appearances in 2016-17.

Two days after his first relegation as a manager was confirmed by a 1-0 loss to Bournemouth, Moyes resigned. He had lost 28 and won only eight of 43 games in charge. At the time, it was the worst return of any permanent Black Cats manager in the top flight aside from Howard Wilkinson, who won just 14.8% of games from October 2002 to March 2003.

It was a surprise, therefore, when West Ham turned to Moyes to keep them in the Premier League in November 2017. Eight wins – including his 200th in the division, the fourth man to achieve the feat – and nine draws in 27 matches was enough to secure their survival, if not a longer-term contract.

When the Hammers turned to Moyes again in December 2019 to replace Manuel Pellegrini, many saw it as another fire-fighting job, a panicked move by the owners to stave off fears of the drop. It’s proven to be so much more.

This season, West Ham are averaging 1.72 points per game, the best return of Moyes’ career in England’s top flight – better even than the Tim Cahill-inspired Everton side in 2004-05 that finished fourth. The Hammers find themselves in fifth position in the table with six games to go and, according to Stats Perform’s league predictions, they have an almost 26% chance of finishing in the top four – more than double Tottenham’s chances.

New ground is being trodden under Moyes once more, but in far brighter pastures. Against Arsenal, Wolves and Leicester City, they scored three goals in three consecutive top-flight games for the first time since 1928. They have scored at least three in a league game 15 times since Moyes’ return; only Manchester City (19) and Manchester United (17) have done so in league games more often in that time.

In Moyes’ first 50 games in charge in his second spell at London Stadium, West Ham won 75 points, the most over that number of matches in 13 years. Indeed, in 2021, only Manchester City (17) have won more Premier League games than Moyes’ men (10), who have earned 32 points from a possible 48 since the turn of the year.

Perhaps it’s fitting that Moyes’ most recent star performer is another who was cast adrift at United. Jesse Lingard has scored eight goals in nine league games since joining on loan since January, equalling his best return for a top-flight season set back in 2017-18. Lingard also has three assists to his name in those nine outings, making him the quickest Hammers player in history to reach double figures for direct goal involvements. Like Cahill at Everton 16 years ago, Lingard is proving an unlikely talisman in West Ham’s charge towards upsetting the top order.

Moyes has trodden a long road to redemption since his United dismissal. However West Ham’s season finishes, he deserves to be held in higher esteem.