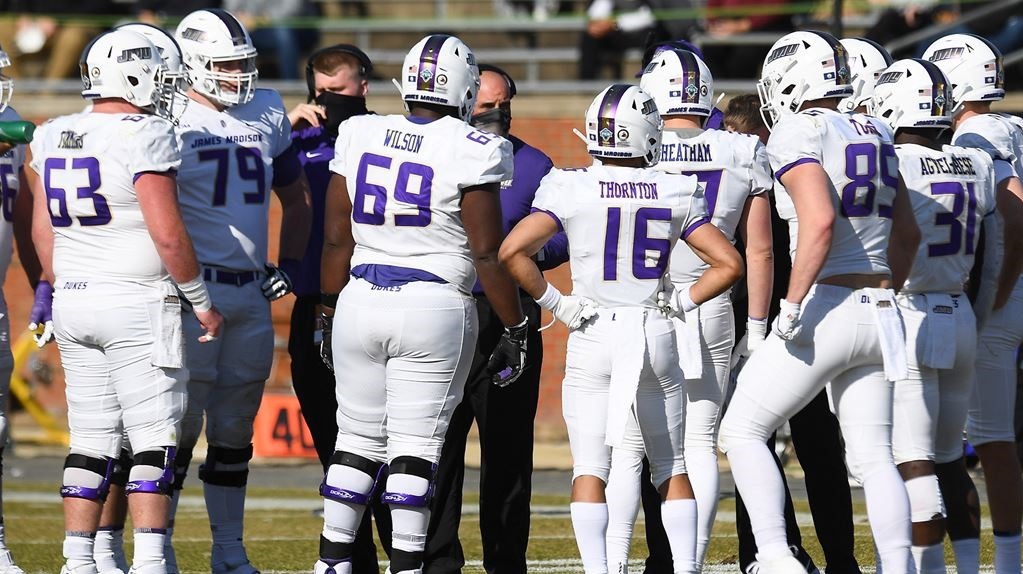 No. 1 James Madison set to return after back-to-back postponements

Set to play on Saturday for the first time in three weeks, top-ranked James Madison is seeking to avoid an upset at rival William & Mary.

James Madison has had games postponed each of the past two weeks due to positive COVID-19 cases and related protocols within its program. The Dukes haven’t played since a 20-17 win at Elon in their CAA Football opener on March 6.

“I knew going in (this season), the chances were there were going to be disruptions,” second-year coach Curt Cignetti said, “and you’re going to have to be flexible, take kind of a big-picture perspective and try not to get too caught up in things you can’t control. But still, the setbacks are hard to deal with.”

The defending CAA champ is 3-0, so a setback has not occurred in the loss column. William & Mary offers that possibility with a young, but fast-maturing team under coach Mike London, and the Tribe (1-1) just handled Elon 31-10.

James Madison had one player test positive for coronavirus two days before its Elon trip. While he went into quarantine, the team took precautions by travelling in seven buses and separating into three different dressing areas – a locker room and two auxiliary tents – but there was an increase in positive cases, forcing a pause in team activities on March 8.

The Dukes had to call off home games against William & Mary and Richmond, with one presumably cancelled and one likely to be rescheduled for April 17 – the final day of the spring regular season. They had only one practice in the first two weeks after the Elon game.

Redshirt junior quarterback Gage Moloney came off the bench to lead the second-half rally at Elon, and two days later Cignetti announced publicly he would be the starter for the following game, but it occurred only hours before the pause of team activities.

“I’ve learned in this day and age about COVID not to look past today,” Cignetti said. “You control what you can control; there’s a lot of things out there that you can’t control.

“Really when it comes to availability and numbers, the thing that I’ll comment on is we have a football team, and if we’re able to play, we’re going to roll a football team out there on Saturday.”

James Madison has won the last four meetings with William & Mary to take a 25-17 series lead, but the Tribe are 12-11 when they’ve played in Williamsburg, Virginia.