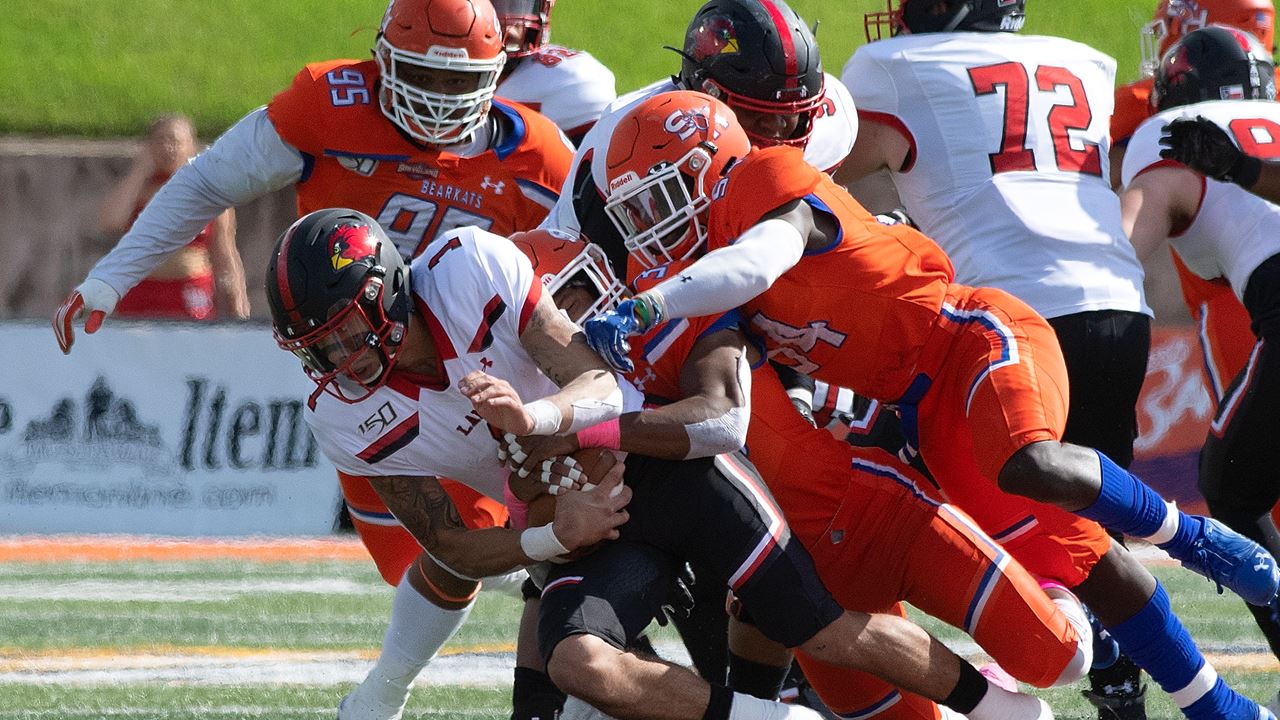 Not all schools have decided to play this spring. In the Southland Conference, seven of 11 – all but Abilene Christian, Central Arkansas, Houston Baptist and Stephen F. Austin – will play a six-game conference schedule, which begins on Feb. 20.

Schools have the option to play up to two nonconference games. McNeese will kick off the FCS spring season at independent Tarleton on Feb. 13.

Following is a capsule look at Southland spring participants in order of predicted finish:

THE SKINNY: The lack of key transfer losses aids the Bearkats as they seek their first FCS playoff appearance since 2017. Their defense may be the best of the Keeler era, having led the FCS in rushing defense (69.9 ypg), tackles for loss (10.9 per game) and third-down conversion percentage (27.9) in 2019. The unit boasts a fierce front with Trace Mascorro, Jevon Leon and Joseph Wallace, while the secondary features cornerbacks Zyon McCollum and Jaylen Thomas. Quarterback Eric Schmid and running back Donovan Williams need a young offensive line to solidify quickly. Australian-born punter Matt McRobert was named to the Stats Perform FCS Preseason All-America first team.

THE SKINNY: A playoff win over Villanova that was just their second on the FCS level punctuated the Lions’ 2019 season. Quarterback Cole Kelley (20 total touchdowns) often came off the bench behind graduated starter Chason Virgil and should have a banner senior season with much of the receiving corps returning. Transfer running back Morgan Ellison brings in a tantalizing combination of power and speed. The defense ranked only seventh in the conference, but it gets some injured players back, including linebacker Mike Mason, to rejoin linebacker Alexis Ramos and All-America cornerback Ferlando Jordan.

THE SKINNY: The Cowboys have a different head coach for the third straight season – Wilson, the first African-America head coach in school history and just the second in the Southland. The school was ravaged by two hurricanes in the fall, but the rebuilding effort has bonded the team. Senior quarterback Cody Orgeron passed for 2,628 yards and 24 touchdowns in 2019 and gets back senior wide receiver Trevor Begue (10 TDs), adding in JUCO running back transfer Deonta McMahon as one of up to eight transfers potentially in the season-opening lineup. The secondary was hurt by transfers to FBS programs, but safety Cory McCoy’s 18 pass breakups as a junior tied for the Southland high.

THE SKINNY: The 2018 Southland co-champ had its 2019 campaign unravel with a five-game, season-ending losing streak. Junior quarterback Jon Copeland, the 2018 Southland freshman of the year, entered the NCAA transfer portal in late December, which means the Cardinals are unexpectedly starting over behind center. A defense led by junior linebacker Kelechi Anyalebechi (11½ tackles for loss in 2019) will look particularly different, but it surely needs to after ranking 10th in the Southland.

THE SKINNY: While the Demons have had five straight losing seasons, they won three of their final five games after an 0-7 start in 2019. Inside linebacker Ja’Quay Pough (team-high 101 tackles) and cornerback Shemar Bartholomew (four interceptions) were particularly strong down the stretch. Junior quarterbacks Bryce Rivers and Kaleb Fletcher have the most experience as the offense replaces two-year starter Shelton Eppler. The run game needs significant improvement.