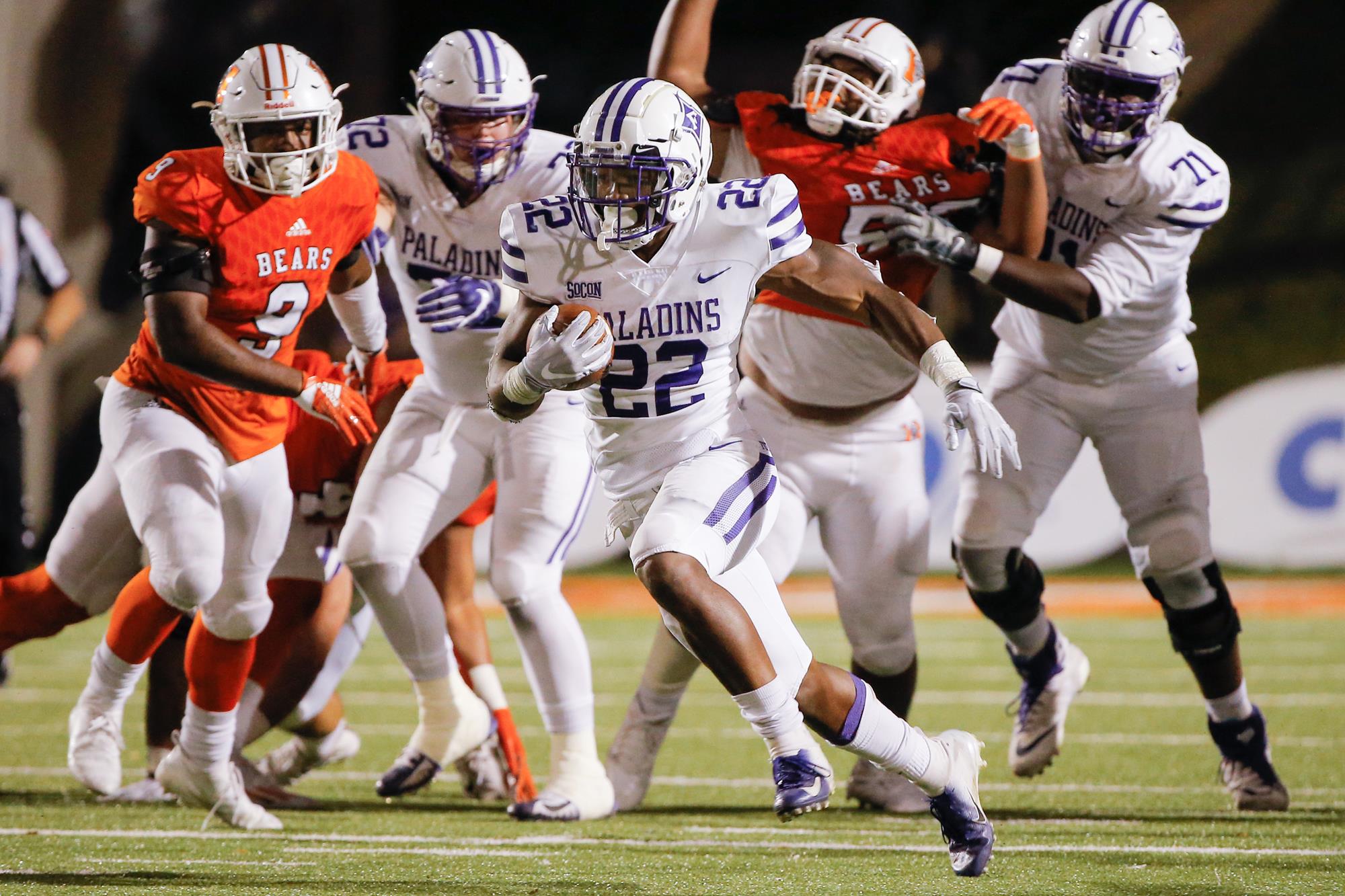 While not all schools have decided to play this spring, the Southern Conference is the exception as the only FCS conference in which all members will be in action. They will play an eight-game conference schedule, beginning Feb. 20.

Following is a capsule look at SoCon teams in order of predicted finish:

THE SKINNY: Favored in the SoCon preseason media poll, but not the coaches poll, the experienced Paladins (13 returning starters) should be considered the team to beat. They’re loaded at running back with Devin Wynn (1,182 yards, 14 touchdowns) and Devin Abrams (615, 6), and a stout defense has key returnees, including defensive end Adrian Hope, linebackers Elijah McKoy and Braden Gilby and cornerback Travis Blackshear. Sophomore quarterback Hamp Sisson seeks consistency after sharing the No. 1 job in 2019. The Paladins cap their regular season on April 17 by hosting Woffod, the SoCon’s three-time defending champ.

THE SKINNY: The Mocs played once in the fall, suffering a 13-10 loss at Western Kentucky in a game that had a controversial ending. Since then, they’ve lost two-time All-SoCon wide receiver Bryce Nunnelly to a grad transfer. Regardless, the Mocs think run first with a veteran offensive line (which added Austin Peay’s Blake Mitchell) and sophomore Ailym Ford, the SoCon’s 2019 freshman of the year (1,081 rushing yards and nine touchdowns). Fifth-year senior quarterback Drayton Arnold earned the WKU start, but junior Cole Copeland may be in the mix. The defense is usually stronger than its 2019 level, and the unit returns standouts in defensive end Devonnsha Maxwell, linebacker Jay Person and strong safety Branmdon Dowdell.

THE SKINNY: With three straight SoCon titles and four FCS playoff appearances in a row, the Terriers don’t plan to take their foot off the pedal. They will have many new starters, though, most notably at quarterback, where Joe Newman was the SoCon’s 2019 offensive player of the year. Either sophomore Jimmy Weirick or junior Peyton Derrick will run the option offense, with backs Jacquez Allen and Ryan Lovelace the top returnees from a rushing attack that averaged 305.8 yards per game. The always strong defensive line has undergone a youth movement with sophomores Michael Mason (10.5 tackles for loss, seven sacks) and Tanner Barnes. The Terriers were ranked 16th in the Stats Perform Preseason FCS Top 25 lin August – one spot behind Furman.

THE SKINNY: A veteran Bulldogs’ squad is intent on reversing the program’s first losing season since 2010, but it must improve on the SoCon’s worst turnover margin (minus-13). Fifth-year senior quarterback Chris Oladokun returns, again backed by Liam Welch. In a conference with excellent running backs, Jay Stanton can’t be overlooked after gaining 690 rushing yards and nine overall touchdowns as a freshman. The defense needs to improve its tackling, but defensive tackle Armond Lloyd will build on his breakout season as a junior. No team in the SoCon has a stronger special teams trio than place-kicker Mitchell Fineran, punter Bradley Porcellato and All-America punt returner Montrell Washington.

THE SKINNY: VMI is coming off its best season since 2003 as well as its highest SoCon win total since 1979. They boast all-conference quarterback Reece Udinski, a two-time 3,000-yard passer who also set an FCS record in 2019 by throwing 368 straight pass attempts without an interception. Although he is a Keydet this spring, he’s announced a grad transfer to Maryland for the fall season. His No. 1 wide receiver, Jakob Herres, is back to do more damage, but the offense has lost 2019 All-America running back Alex Ramsey. VMI has to get better defensively after ranking last in the conference. Defensive end Jordan Ward and defensive back A.J. Smith are the top returnees.

THE SKINNY: The general thought was The Citadel could sneak off with the 2020 SoCon title, but after the conference schedule was postponed last fall, the Bulldogs had key opt-outs and went 0-4 in nonconference games (they’ve since been granted an NCAA waiver to play 12 regular-season games in an 11-game academic year). Third-year quarterback Brandon Rainey is among the spring out-opts, but the Bulldogs still have linebacker Willie Eubanks, the SoCon’s 2019 defensive player of the year. Their triple option running attack will rely on sophomores, including quarterback Jaylan Adams and backs Emeka Nwanze and Keefe White, while senior Raleigh Webb is one of the more decorated wide receivers in school history. Matt Campbell is the SoCon’s top punter.

THE SKINNY: Picked last in the two SoCon preseason poll, the Catamounts hope to be a surprise. They went 0-3 in the fall, including a pair of FBS defeats, and are 2-13 on the road since the start of the 2018 season. The defense has some excellent players, including defensive end Jayden Pauling returning from injury, but it has to produce better results. Ty Harris (106) and Trevor Childers (99) were two of the SoCon’s leading tacklers in 2019, and safety A.J. Rogers had the team high (21) in the fall. Redshirt junior Will Jones was the starting quarterback in the fall, but he’s faced competition this preseason from Penn grad transfer Ryan Glover. No matter who’s the starter, the Catamounts went to get the ball in the hands of running back Donnavan Spencer, wide receiver Daquan Patten and tight end Owen Cosenke.

THE SKINNY: The drop-off in 2019 was surprising considering the Buccaneers earned a share of the 2018 SoCon title. They were picked eighth in the conference’s preseason coaches and media polls. Quarterback Trey Mitchell impressed as a freshman, but has since left the program, opening the job for dual-threat Tyler Riddell, who saw time in four games. Junior running back Quay Holmes has gained 2,484 yards and 23 touchdowns from scrimmage in his first two seasons and has a tag-team partner in Jacob Saylors. While the Bucs are rebuilding on both lines of scrimmage, Tre’mond Shorts is an anchor on offense and Black Bockrath on defense. Free safety Tyree Robinson seeks to rebound off an injury-hampered junior campaign.

THE SKINNY: Coming off an 0-3 fall nonconference record, the Bears seek to get on track in Cronic’s first SoCon season. His Reinhardt and Lenoir-Rhyne teams had high-powered offenses, but the Bears could struggle without Tyray Devezin, who entered the NCAA transfer portal. In 2019, he became the second player in program history to surpass 1,000 rushing yards in a season. Quarterback Harrison Frost was the fall starter while Robert Riddle, who passed for 15 touchdowns in seven games last year, worked his way back from a season-ending injury for the second consecutive year. The defense ranked last against the rush (269.2 yards per game) in the SoCon, but safety Lance Wise is a standout, and true freshman linebacker Isaac Dowling was a revelation in the fall, averaging 13.7 tackles per game with four sacks.