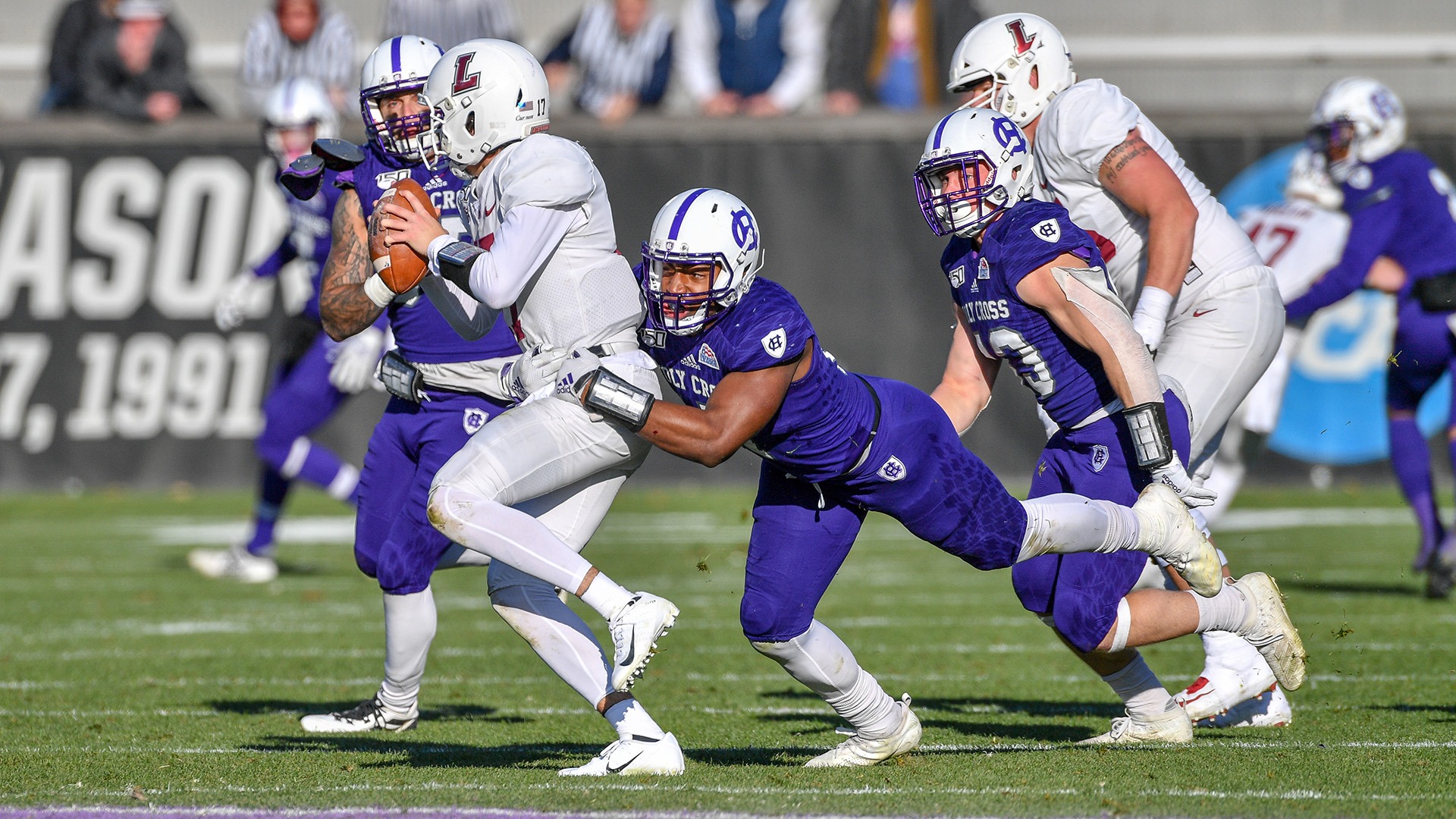 Not all schools have decided to play this spring. In the Patriot League, six of the seven programs – all but Georgetown – will play a four-game league schedule, which begins on March 13. They’ve been split into North and South divisions, with the first-place teams meeting in a first-ever championship game on April 17.

Following is a capsule look at Patriot League spring participants in order of predicted finish:

THE SKINNY: The defending Patriot League champion seeks to go back-to-back with its veteran lineup. The Crusaders may be hard-pressed to replace running back Domenic Cozier, the league’s 2019 offensive player of the year, but junior Peter Oliver appears primed to become the starter. Senior quarterback Connor Degenhardt, who passed for 2,372 yards and 14 touchdowns, still has the productive wide receiver trio of Ayir Asante, Tenio Ayeni and Spencer Gilliam. Senior tackle Brian Foley is among the league’s best offensive lineman – set to make a graduate transfer to Duke this fall. Defensive end Benton Whitley is coming off a breakout season, while sophomore linebacker Jacob Dobbs led the Crusaders in tackles (93), tackles for loss (12), sacks (six) and takeaways (six) as a rookie.

THE SKINNY: The Rams will be much-improved, and a title threat, behind eight returning 2019 All-Patriot players, including five first-teamers: league passing leader Tim DeMorat, 1,000-yard rusher Zach Davis, left tackle Nick Zakelj and linebackers Glenn Cunningham and Ryan Greenhagen – the latter duo having combined on 72 tackles for loss in their careers. No team has any many offensive weapons. In addition to Davis, DeMorat can spread the ball to running back Trey Sneed (552 yards, six touchdowns) and the wide receiver trio of Dequece Carter, Hamze El-Zayat and Fotis Kokosioulis (164 receptions, 1,986 receiving yards and 16 TD catches). Surprisingly, the Raiders are 2-9 at home under Conlin.

THE SKINNY: A decline in 2019 was stunning considering a year earlier the Raiders swept to the league team and went 10-2 with an FCS playoff win over James Madison. The Raiders allowed a league-high 49 sacks, so dual-threat quarterback Grant Breneman needs better protection to get back to his 2017 and ’18 form. The offense also has key returnees in running back Malik Twyman and two-time all-league offensive lineman Jack Badovinac. It feels impossible to replace all-time sacks leader Nick Wheeler on a defense that features junior defensive back Collin Heard. Quite simply, the Raiders need players to develop from secondary roles into big contributors, which has been a staple through the years.

THE SKINNY: The 2019 non-league schedule was too difficult, but the Bison were quite competitive within the Patriot League in Cecchini’s first season, including four- (Lafayette) and seven-point (Holy Cross) losses. A veteran team returns, with the biggest loss being four-year punter Alex Pechin, a two-time first-team All-American. The offense needs to be more potent, but quarterback Logan Bitikofer can spread around the ball, especially to wide receivers Dominic Lyles and Brandon Sanders and running back Jared Cooper – each a junior. The defense is always strong within the league. Outside linebacker Simeon Page, who is planning to make a grad transfer this fall, and cornerback Gavin Pringle are the key returnees.

THE SKINNY: The Leopards were in title contention until the final Saturday of the 2019 regular season and hope to take an even bigger step this spring. All-America defensive end Malik Hamm was the league’s defensive player of the year, but quarterback and rookie of the year Keegan Shoemaker has departed via a transfer to Sam Houston. Still, there’s plenty of experience behind center because Sean O’Malley was the 2017 and ’18 starter, although he must cut down on turnovers. Linebackers Major Jordan, Marco Olivas and Billy Shaeffer ranked 1-2-3, respectively, in tackles. Place-kicker Jeffrey Kordenbrock drilled a career-defining field goal to topple rival Lehigh. The 156th meeting of college football’s most-played series will be played on April 3 at Lafayette.

THE SKINNY: Gilmore enters his second season at Lehigh, but also as the dean of Patriot League head coaches (2004-17 seasons at Holy Cross). Senior wide receiver Jorge Portorreal has gone over 50 receptions in each of his first three seasons, but after him, the Mountain Hawks don’t necessarily have the star power of past teams. That will help create a hard-hat mentality, which is fine to Gilmore, whose offense will have a new starting quarterback (junior Alec Beesmer was the 2019 backup) and seeks more consistency on the offensive line. Running back Zaythan Hill’s freshman season was highlighted by a league-record 94-yard touchdown run against Fordham. The defense features senior linebackers Pete Haffner and Erik Slater.