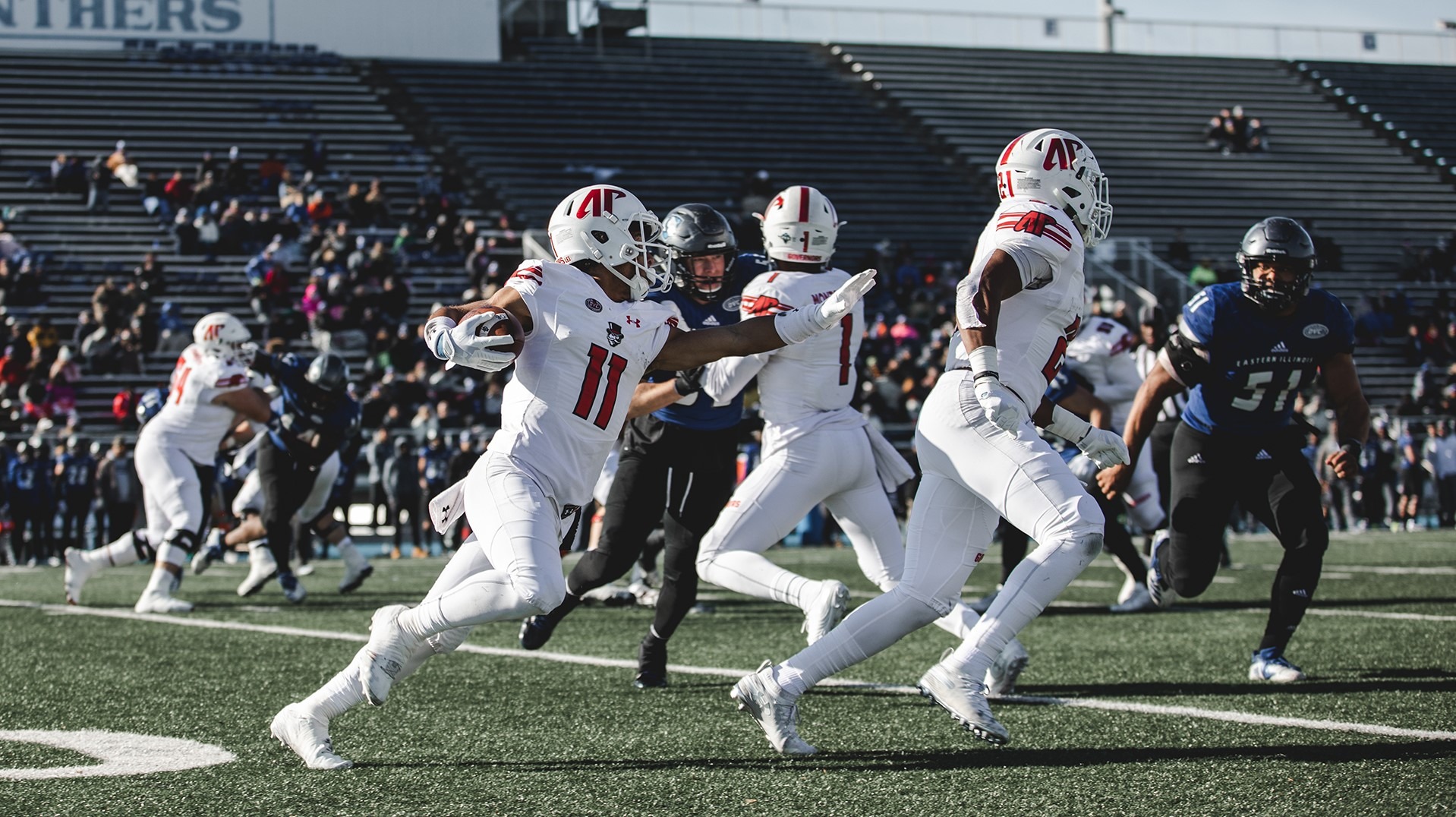 Not all schools have decided to play this spring. In the Ohio Valley Conference, eight of the nine schools (all but Eastern Kentucky) will play a seven-game conference schedule, beginning on Feb. 21.

Following is a capsule look at OVC spring participants in order of predicted finish:

THE SKINNY: An FBS win (FIU) during a 3-1 fall nonconference schedule is a big boost on the Gamecocks’ playoff resume, but they want to get back to the FCS playoffs as the OVC champ (they won five straight titles from 2014-18). Junior Zion Webb will be the No. 1 quarterback while Zerrick Cooper, who’s twice led the conference in passing yards and touchdown passes, recovers from injury. The top offensive player is All-America tight end Trae Barry, but transfer running back Josh Samuels ended the fall with a huge performance against FIU. Depth will be important in the spring season, and the defense had a lot of contributors this past fall, including defensive end D.J. Coleman, one of the nation’s better pass rushers. Not to be overlooked is true freshman place-kicker Alen Karajic, who’s opened his career by going 8 of 9 on field-goal attempts and 11 of 11 on PATs.

THE SKINNY: A program that is coming off its best season (2019) normally doesn’t need a fresh start, but the Govs basically do considering coach Mark Hudspeth stepped down in July, they went 0-3 in fall nonconference games under interim coach Marquise Lovings, and have since lost quarterback Jeremiah Oatsvall and offensive lineman Blake Mitchell to transfers and defensive tackle Josephus Smith in a spring opt-out. The 31-year-old Walden is Division I’s youngest head football coach. Junior Kam Williams steps in behind center, and the offense still boasts wide receivers DeAngelo Wilson (89 catches, FCS-high 1,564 receiving yards and 15 TDs in 2019) and Baniko Harley (12 overall TDs) and true freshman running back C.J. Evans Jr. Nickel back Kordell Jackson was a consensus first-team All-American as a junior and remains the leader of a defense that also returns linebacker Jack McDonald (team-high 118 tackles).

THE SKINNY: Although they’re replacing a superb senior class from 2019, the Redhawks remain a title threat after sharing the crown with Austin Peay. They fell to Southern Illinois 20-17 in a fall nonconference game between nationally ranked programs. Nebraska transfer quarterback Andrew Bunch got acclimated to the offense and showed off his running ability with 115 yards, but Matukewicz would prefer to let running backs Zion Custis and Geno Hess do more of the heavy lifting behind a veteran offensive line. Bunch can look to a big target in 6-foot-4 wide receiver Aaron Alston, who caught 51 passes and four touchdowns in 2019, and the always-productive Zack Smith. The defense is excellent at forcing turnovers and features Bydarrius Knighten (five career interceptions). After kicking in the fall game, Kendrick Tiller (26 career field goals) is no longer a part of the program.

THE SKINNY: Only a sophomore, 2019 OVC freshman of the year John Bachus III is included among the conference’s experienced quarterbacks. He will keep the ball moving when he gets it to running back Peyton Logan and wide receiver Colton Dowell, who moves out wide after being a big-play tight end in 2019. The offensive line must improve, though, after surrendering a conference-high 37 sacks in 2019. While the Skyhawks allowed the fewest points in OVC games (19.5 on average), they’re replacing some key players. At least they can count on defensive tackle Austin Pickett and safety JaQuez Akins (92 tackles), who were both named to the OVC preseason team. Another key loss is place-kicker Ryan Courtright (25 of 31 in career field goals).

THE SKINNY: Hood is familiar with the OVC from his excellent eight-year run (2008-15) at Eastern Kentucky. His team’s key loss is linebacker Anthony Koclanakis, who led the OVC with 124 tackles in 2019, but departed via a grad transfer. The loss at linebacker will put more of a spotlight on sophomore Alec Long and junior Scotty Humpich. The offense has to establish a better run game to support dual-threat quarterback Preston Rice, who accounted for 3,298 yards of total offense and 22 TDs as a sophomore. His go-to receiver is fellow junior LaMartez Books (47 receptions, 819 yards, 7 TDs). Wide receiver Malik Honeycutt does a lot of his damage on returns.

THE SKINNY: TTU’s second season under Alexander was a big jump from his 2018 debut (1-10 overall and 1-7 OVC). To keep the evolution going in their 99th season, the Golden Eagles need to shore up the defense because they allowed 425.1 yards per game (eighth in OVC) and 35.2 points per game (last) in 2019. All-OVC defensive end Chris Tucker and defensive back Tai Carter seek to lead overall improvement. Just a little defensive improvement will go a long way because the Golden Eagles can win high-scoring games behind quarterback Bailey Fisher, who accounted for 3,132 yards of total offense and 32 touchdowns as a sophomore. Also back are his most productive weapons, running back David Gist and wide receiver Metrius Fleming.

THE SKINNY: There’s no easing into the OVC schedule because the Tigers open it against Austin Peay and Jacksonville State. While .500 overall, Reed is only 29-45 against conference opponents. His staff signed transfers to bolster a potential turnaround, including former Marshall quarterback Isaiah Green (13 starts in 2019), Vanderbilt center Sean McMoore and Kentucky defensive tackle Davoan Hawkins. Offensive tackle Cam Durley, in his second season since a transfer from Kansas, and cornerback Nick Harper Jr., the son of former NFL player Nick Harper Sr., are All-OVC players. Place-kicker Antonio Zita (32 of 38 career field goals) entered the NCAA transfer portal last year, but decided to remain at TSU.

THE SKINNY: Perhaps the extra time off will benefit the Panthers as they try to be more in synch as a team following their first one-win season since 1977 (the win was against Tennessee State). The offense ranked last in the conference in rushing and total offense, but should get steadier play out of quarterback Harry Woodbery, who teams well with junior wide receiver Isaiah Hill. While a better pass rush is needed from the defensive line, the back units are stocked with veterans, including linebackers Dytarious Johnson (13.5 tackles for loss) and Iziah Gulley and defensive backs Raymond Crittenden, J.J. Ross and Mark Williams.