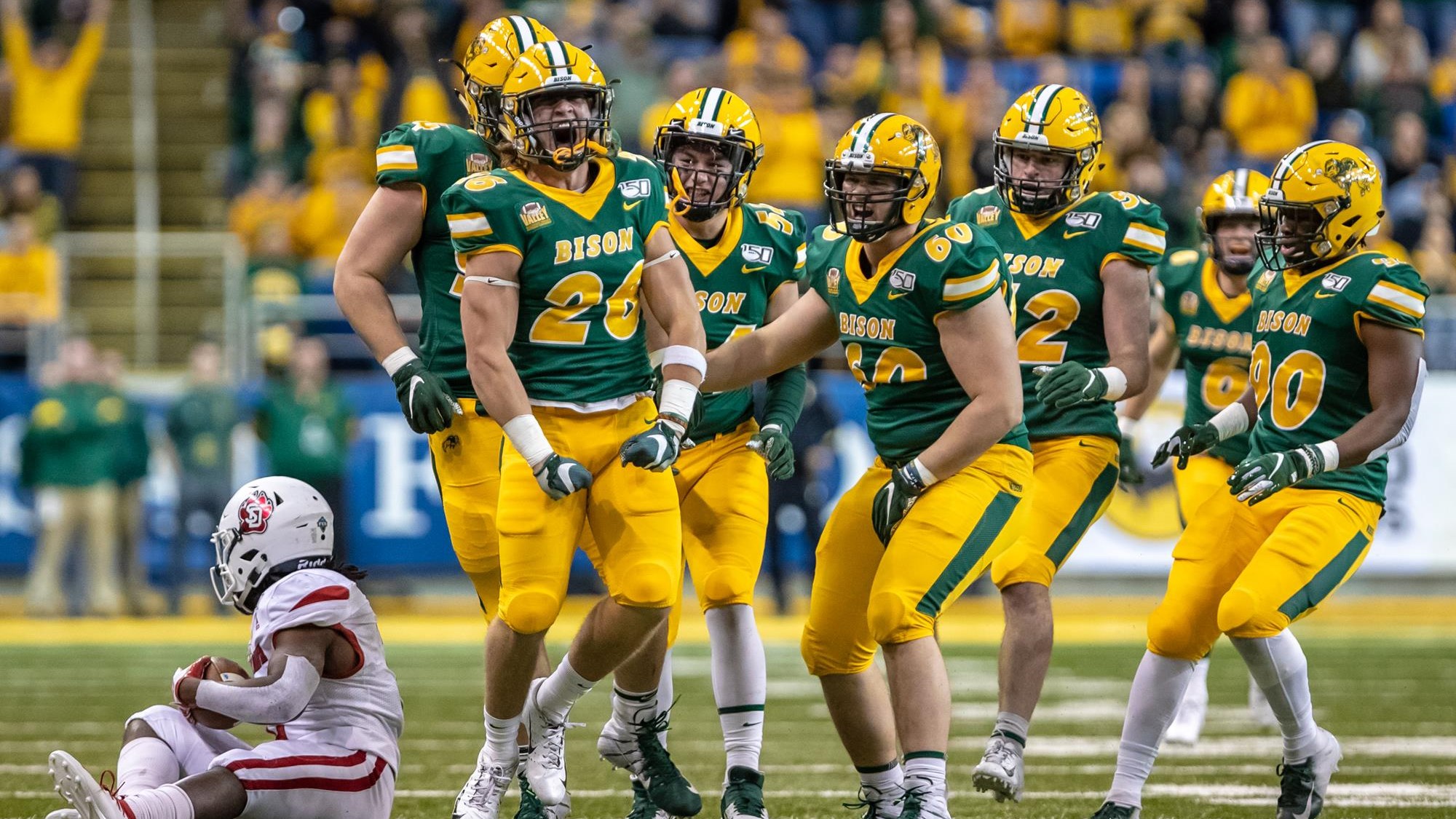 Not all schools have decided to play this spring. In the Missouri Valley Football Conference, 10 of the 11 programs (all but Indiana State) are set to play an eight-game conference schedule, which begins on Feb. 19.

Following is a capsule look at MVFC participants in order of predicted finish:

THE SKINNY: The three-time defending national champion rallied past Central Arkansas in a standalone fall game to push its winning streak to an FCS-record 38 games. The Bison have since lost two 2019 first-team All-Americans, quarterback Trey Lance and left tackle Dillon Radunz, who are off to the NFL. Still, the FCS’ dynasty program has incredible depth, so it remains a unanimous No. 1 nationally heading into the season. Former Iowa State quarterback Zeb Noland will spread the ball in many ways, including to wide receivers Christian Watson and Phoenix Sproles and running backs Kobe Johnson and Seth Wilson. Fullback Hunter Luepke was clutch in the Central Arkansas game. The defense has a terrific duo at linebacker in Jackson Hankey (team-high 127 tackles in 2019) and James Kaczor, and strong safety Michael Tutsie corralled seven interceptions as a sophomore. The Bison have won nine straight MVFC titles and eight national championships since 2011.

THE SKINNY: Due to grad transfers and players off training for the NFL Draft, the third-ranked Panthers’ lineup looks so different from what it could have been for Farley’s 20th season. Their defense held 11 opponents to 14 points or less in regulation during the 2019 season, when they advanced to the national quarterfinals. They return all-conference, if not All-America, players in each unit with defensive tackle Jared Brinkman, linebacker Bryce Flater (MVFC-high 143 tackles) and cornerback Omar Brown. Quarterback Will McElvain (2,778 passing yards, 20 touchdowns) has his choice of downfield targets with All-American Isaiah Weston and a healthier Deion McShane. Matthew Cook was the first-team All-MVC kicker as a freshman. The MVFC record-holder, Farley’s next conference win will be his 100th.

THE SKINNY: Ranked No. 5 in the national preseason rankings, the Jackrabbits will face a daunting road schedule: Northern Iowa, North Dakota, Southern Illinois and North Dakota State. Of course, they’ve developed into one of the elite FCS programs, making the playoffs in eight straight seasons while going 21-11 in road conference games. Two-time 1,000-yard rusher Pierre Strong Jr. is back for more long gains, although sophomore quarterbacks J’Bore Gibbs and Keaton Heide can no longer look to two-time 1,000-yard wide receiver Cade Johnson, who’s training for the NFL Draft. Sophomore wideout Jaxon Janke should slide into the No. 1 role. The defense is highly experienced, but the big loss is all-time leading tackler Christian Rozeboom at linebacker. The returnees include three preseason All-MVC selections: defensive end Reece Winkelman, linebacker Logan Backhaus and cornerback Don Gardner.

THE SKINNY: The loss of All-America running back James Robinson after the 2019 season was known, but the last year has since cost the national quarterfinalist of a number of other key players, including quarterback Brady Davis, running back Jeff Proctor, defensive end Romeo McKnight and defensive backs Christian Uphoff and Devin Taylor. Bryce Jefferson, a running-style quarterback, will rely on 6-foot-10 left tackle Drew Himmelman’s pass protection while seeking out wide receivers Kacper Rutkiewicz and Andrew Edgar. The defense has regrouped around nose guard John Ridgeway, linebacker Zeke Vandenburgh and cornerback Charles Woods. Spack is two wins away from matching Edwin Struck’s school record (84).

THE SKINNY: A win over rival Southeast Missouri in their only fall game gave the Salukis a nice springboard toward the spring season. They boast one of the FCS’ better all-around players in sophomore running back Javon Williams, who scored 19 touchdowns and passed for two more in his 2019 freshman campaign. Romeir Elliott will get plenty of carries as well. Quarterback Kara Lyles should keep getting better as he seeks out wide receivers Avante Cox and Landon Lenoir. All-MVFC defensive end Anthony Knighton has 39 tackles for loss and 21.5 sacks in his career, and outside linebacker Makel Calhoun led the team with seven sacks in 2019. The secondary no longer boasts Carolina Panthers star Jeremy Chinn, but Qua Brown hopes to be building an NFL resume. The Salukis will face North Dakota State, Northern Iowa and South Dakota State at home.

THE SKINNY: Not to be lost in the Coyotes’ sixth-place prediction in the MVFC preseason poll was the Coyotes gaining the third-most preseason selections (eight): running back Kai Henry, tight end Brett Samson, offensive lineman Mason Scheidegger, linebacker Jack Cochrane and punter Brady Schutt plus wide receiver Caleb Vander Esch, kicker Mason Lorber and long snapper Dalton Godfrey as honorable mention selections. One of the keys to the season is consistency at quarterback, where last year’s backup, Tyler Tsagalis, has sought the No. 1 job. Defensive coordinator Travis Johansen is seeking improvement in his second season after the Coyotes ranked ninth in the conference in total defense. They also were the most penalized MVFC team.

THE SKINNY: The Fighting Hawks’ jump into the MVFC appears daunting, but they’ve been hardened by playing Big Sky schedules. They also didn’t have much attrition, unlike other Valley programs, and were picked seventh in the conference’s preseason poll. The defense will lead the way. Cornerback Evan Holm has waited a long time to utilize his sixth year of eligibility, combined with safety Jordan Canady on the back end. Senior linebacker Jaxson Turner, who played through an injury-riddled 2019 campaign, forms a strong duo with junior Noah Larson. The offense will look vastly different in the skills positions. While quarterback is an inexperienced position, redshirt freshman Tommy Schuster played well in a 2019 win over Sam Houston.

THE SKINNY: While there is optimism surrounding the Petrino era, the Bears were a mere 32-80 in the 2010s. They went 0-3 in the fall, but were competitive in two meetings against Central Arkansas. Redshirt freshman quarterback Jaden Johnson and senior cornerback Jeremy Webb, a pair of FBS transfers, were big additions. The offensive line has to block better against pass rushers, but Johnson looks to a bunch of tall receivers, including 6-foot-3 Damoriea Vick and 6-5 Lorenzo Thomas. A healthier Jeremiah Wilson and Kevon Latulas could revive the subpar run game. The defense doesn’t lack for senior leadership with cornerback Zack Sanders and linebackers Titus Wall and Tyler Lovelace.

THE SKINNY: Over a year after his hire, Phillips is finally getting on the field with his new-look Penguins’ squad. A Cincinnati assistant from 2017-19, Phillips has the fewest returning starters in the MVFC, so his signing class included a bunch of transfers. The defense is particularly young. If there’s a main building block, it’s sophomore defensive tackle DeMarko Craig Jr., who had a banner debut (39 tackles, 11.5 tackles for loss, seven sacks). Senior safety Zaire Jones, in his second season after a transfer from Vanderbilt, will be a steadying influence. Junior Joe Craycraft and redshirt freshman Mark Waid should both see action at quarterback again, and they must be glad to have offensive lineman Dan Becker back up front. Oh, by the way, Phillips’ first game is at North Dakota State.

THE SKINNY: The Leathernecks led the FCS in turnovers (31) while posting their worst record since going 0-8 in 1944. Their 2021 recruiting class was heavy on transfers, including some who could contribute this spring. Quarterback Connor Sampson, who passed for 368 yards and three touchdowns in the Leathernecks’ lone win over South Dakota, will team with the team’s last two leaders in receiving yards, John Brunner (2018, 625), who redshirted in the 2019 season, and Dennis Houston (2019, 539). However, the top offensive player, fullback Clint Ratkovich departed as a grad transfer. The defense, which ranked last in the MVFC, also suffered some key losses. While senior punter Adam Fellner is excellent, the Leathernecks would like to cut down on his action (75 punts in 2019).