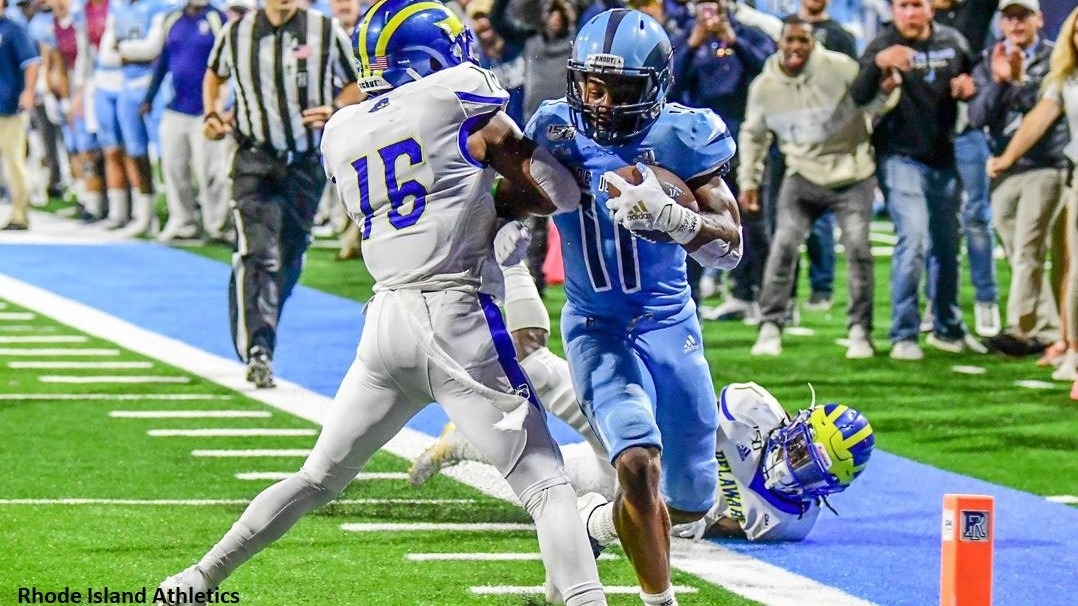 This is a spotlight weekend for upstart teams in FCS college football’s spring season.

You know, the teams that were expected to be getting ready for the fall instead of competing for a league title and a postseason bid.

After finishing 0-8 in the CAA in 2019, Rhode Island has opened with two straight overtime wins on the road against ranked opponents (Villanova and Albany). Meanwhile, Delaware has allowed zero and three points in its wins, which is exactly what the Blue Hens did in their 2010 FCS runner-up season. They’ve forced seven turnovers and will likely attack with running backs Dejoun Lee and Khory Spruill because URI’s rush defense was by far the CAA’s worst in 2019 and is allowing nearly six yards per carry this season. Rams transfer quarterback Kasim Hill has rushed for the winning score in both overtime wins. Speaking of OT, Delaware won 44-36 in three extra periods in the 2019 matchup at URI.

The scoreboard operator should be busy considering UIW (48.7) and Nicholls (47.5) rank second and third, respectively, in the FCS in points per game. Three outings into his career, UIW QB Cameron Ward has racked up 14 touchdown passes and two more rushing scores, twice earning national freshman of the week honors. Just as astonishing, running back Kevin Brown has averaged over 10 yards per carry with at least 10 carries in all three games – an overall line of 36 carries for 503 yards and a 14-yard average. The host Colonels, coming off a bye week to shake off a 71-17 loss to Sam Houston, are 18-2 at home since the start of the 2017 season. Wide receiver Dai’Jean Dixon, an NFL prospect, has at least one TD reception in seven of the Colonels’ last eight games since 2019.

Just two weeks ago, VMI had never owned a national ranking in its FCS era, which began in 1982, but the Keydets have become one of the biggest stories of the spring season. In a 38-37 OT win at Samford last Saturday. QB Reece Udinski added the school’s all-time passing yardage mark (7,872) to his many other records. WR Jakob Herres reeled in a career-high 14 receptions in the win, making the Keydets 6-1 over the last two seasons when he catches eight or more passes. Linebackers Connor Riddle and Stone Snyder both have four sacks to lead a defense that is tied for third in the FCS with 4.5 sacks per game, with 127 yards in loss. But Wofford is the three-time defending SoCon champ and has won eight straight and 13 of the last 14 meetings with VMI – not committing a turnover in nine of those victories.

UAPB, led by interim coach Doc Gamble, was named the FCS national team of the week after its road win over Grambling State was added to a road win over Southern for the Golden Lions’ first 2-0 start since 2000. Skyler Perry set career highs with 384 yards of total offense, 346 passing yards and four touchdown passes, and UAPB improved to 6-1 since 2018 when holding an opponent below 375 yards. To maintain first place in the SWAC West Division, UAPB must upend an Alabama State squad that just handed Jackson State and coach Deion Sanders their first loss. Ezra Gray’s 301 all-purpose yards in the 35-28 win marked the individual high of the FCS season. The Hornets have won 12 of the last 13 meetings, but the exception occurred in 2012, and UAPB went on to capture the SWAC championship.

Under first-year coach Dean Hood, Murray State is off to its first 4-0 start since Houston Nutt’s Eddie Robinson Award-winning season in 1995, and is seeking its first five-game winning streak since 2002. It helps to be an OVC-leading plus-seven in turnover margin and have a 10-2 advantage in sacks compared to opponents. In fact, this matchup may be a battle of the defenses, with Murray ranking second in the conference in scoring defense and total defense, and Eastern Illinois the best against the run. The conference leaders in tackles per game are EIU’s Jason Johnson (11.0) and Murray’s Alec Long (10.0), who are both sophomore linebackers. EIU is starting a true freshman quarterback, Otto Kuhns, for the first time since Jimmy Garoppolo in 2010. Murray has its own rookie standout, Damonta Witherspoon, who ranks fourth among 2020-21 FCS freshmen in rushing yards (307).